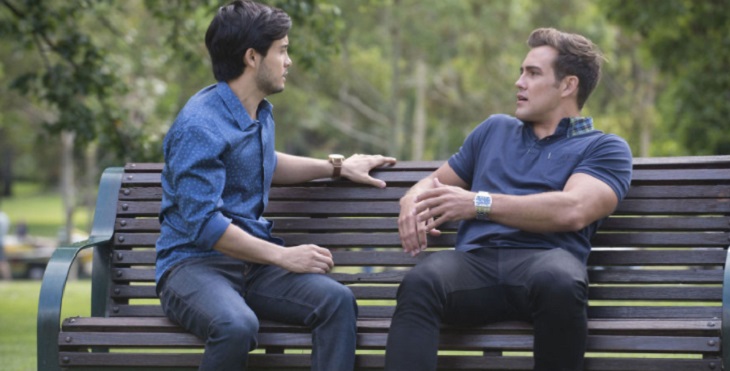 After taking a long time to admit their feelings for one another, Aaron (Matt Wilson) and David (Takaya Honda) had a very strong and stable relationship, that seemed unbreakable to viewers.

However, when Aaron fled to Paris is search of clues about Hamish’s identity, fans became anxious to see him run into ex-boyfriend Rory Zemiro (Ash Williams), who seemed to still be interested in Aaron.

In upcoming Neighbours scenes, David becomes concerned when he comes to realise that Aaron has been keeping secrets when it comes to his ex-boyfriend.

When Rory arrives in Erinsborough, Aaron wants to keep their history as a couple a secret. Even more so, he is desperate to keep their meeting in Paris a secret, even though nothing happened. Aaron has been dealing with this guilt for a while, and even though Amy told him to come clean to David, he decided it was best to keep quiet so that his boyfriend did not worry.

Unfortunately, Aarons secrecy backfires when Rory mentions his dance troupe Rough Trade during a physio session with David, leading him to search for them online. A totally innocent suggestion, David wants to take Aaron to see them, thinking it would be a fun night out. But when he sees Aaron in some of their old pictures he is confused, shocked by how close his boyfriend and Rory seem in the photos.

Neighbours spoilers indicate that David questions Aaron, forcing him to admit that they used to date. But David doesn’t stop there – he digs further into information about Rory and makes some upsetting discoveries.

When Rory next sees David, the dancer tells him that Aaron forced him to keep their dating history a secret, leaving David insecure and worried. Will David demand further explanation from Aaron, or has Rory already come between them? Tune in to Neighbours to find out!