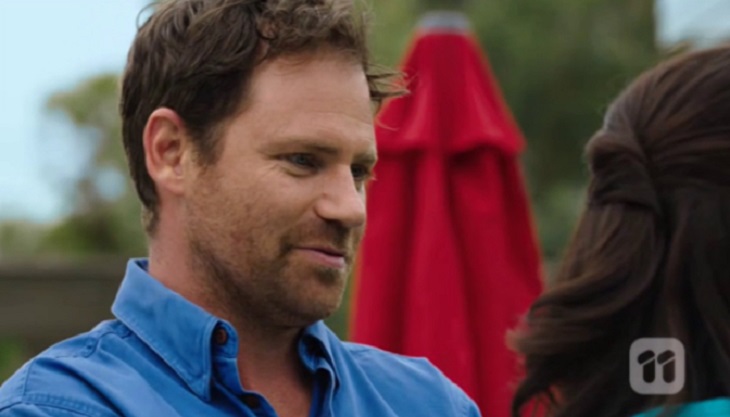 Neighbours’ father Shane Rebecchi gets arrested by sister-in-law Mishti Sharma next week after a violent outburst in public.

Taking out revenge against fellow Neighbour Gary (Damien Richardson) does not end well for Shane (Nicholas Coghlan), as he is forced to pay the price in heated scenes which air next week.

Trouble begins when Shane sets up an important meeting with renowned entrepreneur Levi Jansen. He is hoping to secure some investment in his generator idea – an invention we first saw at the Festival of Lights party last year, which turns human urine into electricity.

Unfortunately, Neighbours spoilers tease Shane doesn’t even get the chance to make his pitch to Levi, as the entrepreneur gets scared away by Gary. Not long after Levi settles into his Lassiter’s room for a quiet work trip to Erinsborough, Gary comes barging in looking for daughter Xanthe (Lilly van der Meer) who he believes is about to sleep with her boyfriend Ben Kirk (Felix Mallard). Clearly Gary got the wrong room, but his outburst is enough to scare Levi away, meaning that Shane’s investment meeting is cancelled.

An upset Shane spends the night out drinking on Neighbours, and only finds out that Gary is to blame when he returns home the next morning. Still under the influence of alcohol, Shane marches over to the Canning house and confronts Gary right away, but in the heat of the moment takes his actions too far.

Of course, Shane has made mention to his violent past before, warning daughter Yashvi (Olivia Junkeer) that he does not want her ending up in prison like he did.

Making things worse, as Shane is in the middle of his violent and public outburst, sister-in-law Mishti (Scarlet Vas) is being given a lift home after a night shift from her boss, Senior Constable Fagan. With her boss watching over her shoulder, Mishti is obliged to put work before family and arrests Shane. Can her family ever forgive her?