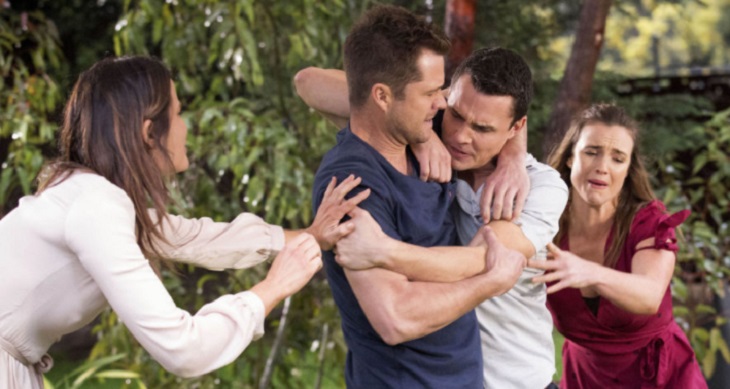 Neighbours spoilers tease that boxing gloves are at the ready! There’s a street fight in Erinsborough next week, solidly confirming that Jack and Mark are no longer friends.

Neighbours enemies Jack Callahan (Andrew Morley) and Mark Brennan (Scott McGregor) are to go head-to-head in a fist fight– something that has been brewing for weeks!

The relationship between Jack and Mark has been awkward for a while, particularly after Mark rekindled his romance with Paige – Jack’s ex on-off-lover. Once Mark started spending more time with Paige and Jack’s son Gabe, and started to see many of the baby’s milestones, Jack began to dislike Mark.

Gabe’s kidnapping pushed everyone to boiling point, and Jack and Mark’s relationship became more strained than ever. Once everything begins to get back to normal after the incident, mutual friends Elly Conway (Jodi Anasta) and Amy Williams (Zoe Cramond) do their best to make the two men see eye to eye. Hoping that they can settle all tension, the girls invite Jack and Mark to join them for a game of croquet, hoping it will be an opportunity for them to bond again.

However, this gravely backfires, and tempers reach boiling point. Neighbours spoilers indicate that Jack is furious when he believes that Mark is flirting with Elly during the game and immediately feels protective of Paige. Of course, Jack’s romantic feelings for Paige began to resurface during the kidnapping incident, so is this actually coming from a place of jealousy?

Not impressed by what Jack is openly suggesting, Mark challenges him to admit that he does not like him being a part of his son’s life and that’s the real issue – not ‘flirting’ with Elly.

Jack admits that he does have a problem with Mark in his son’s life, suggesting that if it was not for the Brennan brother’s dodgy connections Gabe would have never been kidnapped in the first place. Angered by the accusation, Mark retaliates by pointing out that they could have got Gabe back sooner if Jack had not called the police and jeopardized their deal with Louise.

Ironically, the former priest see’s red and punches Mark right in the face. Mark refuses to back off, and the two begin physically fighting. Is this really a solution to their problem? Tune in to find out how the fight unfolds on Neighbours!