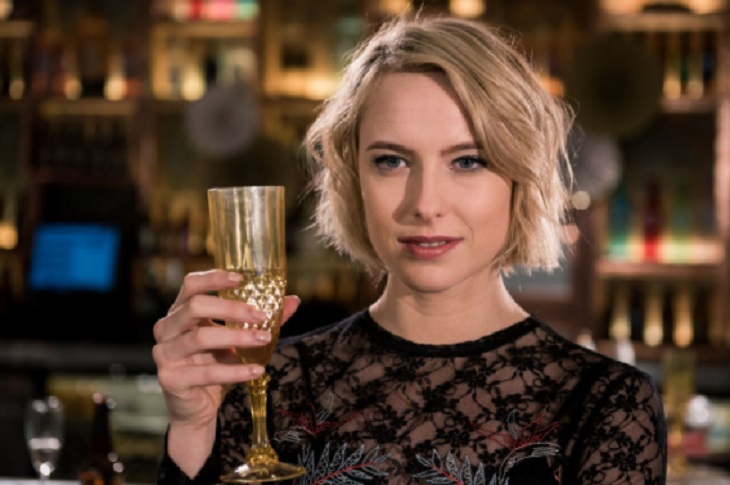 How low can she go? On Hollyoaks Darcy Wilde (Aisling Jarrett-Gavin) has done her share of naughty things, but would she really take candy from a baby? So to speak?

Apparently so, because it looks like she’s about to pounce on young Tom Cunningham (Ellis Hollins) and his upcoming inheritance.

Tom was born to Gordon and Helen Cunningham in 1999; the couple died tragically in 2004. Now the lad is set to come into a small fortune, a fact that has not escaped the wild Miss Darcy.

Related: Hollyoaks Spoilers: Who Will Die In Horrific Car Crash?

Viewers of the Channel 4 sudser already know that she wants Tom’s money, but how in the world can she get her hands on it? By hook or by crook, it’s almost a sure thing that Darcy already has that figured out!

Of course, Tom would not be immune to blond Darcy’s charms, so there’s always that tried and true route. If having a fling with Tom doesn’t work, would Darcy resort to darker means to get her hands on his cash? I wouldn’t put it past her!

But in the meantime Darcy acts fasts by influencing Tom and his impressionable mind. It appears that the young man will buy what she’s selling, at potential peril to his own life. What he doesn’t know will most definitely hurt him!

That’s because devious Darcy is already playing Adam Donovan (Jimmy Essex) into doing something he shouldn’t.

Handsome Adam will play right into her plans when she asks to see their son Toby Wilde (Lucas Haywood). Once again, here’s a male who has no idea who he’s dealing with!

While Darcy plays sweet and innocent, she has no idea of returning Adam to his father. Instead, she plans on taking the boy away to the States.

Will this cunning vixen succeed in pulling the wool over Tom and Adam’s eyes? Or will cooler heads prevail, and bring an end to Darcy’s madness? Stay tuned fans, next week brings plenty of juicy drama to Hollyoaks.