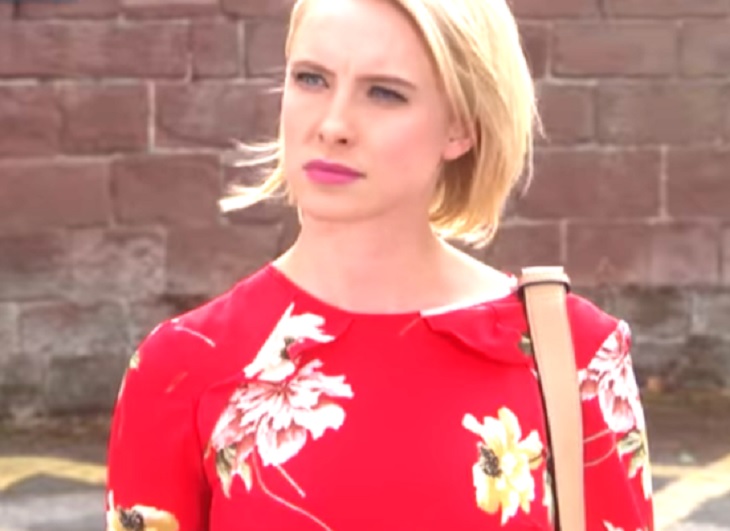 On Hollyoaks Darcy Wilde (Aisling Jarrett-Gavin) has never met a man she didn’t like, a trend she keeps up next week by coming on to gray haired widower Jack Osbourne (Jimmy McKenna), hot on the heels of toying with 18-year old Tom Cunningham (Ellis Hollins). Yikes!

Beautiful, blonde Darcy wants what she wants when she wants it, and right now she wants the means to skip town and leave Hollyoaks with her young son. Poor Tom entered the picture when she heard he’s set to inherit a kingly sum. Sensing an easy score, Darcy set her sights on the newly minted adult.

But next week Darcy will keep on man-eating through town because explosive show spoilers reveal that Jack is now firmly on her radar.

Will the older gent fall for her considerable charms? It just might be an uphill battle because revealing Hollyoak pics see Darcy in some shockingly skimpy lingerie attempting to get Jack’s, ahem, attention. But Jack has his eyes averted, one hand upheld as if to keep the made-up vixen at bay.

To no avail! Another Hollyoaks photo shows the insistent yummy mummy with her paws on the poor man, as he’s leaning backward in the opposite direction.

It seems that Jack has heard some unflattering things about Darcy, someone he was once loyal toward. Will she be able to change his mind back with a little love in the afternoon?

Darcy is wild about keeping her promise to her son that they will leave town together on a big adventure. Of course she’s planning on kidnapping the lad out from under his dad. But she needs some fast cash in order to put her plan in action.

Related: Coronation Street Spoiler: You Won’t Believe Which Fan Favorite Is Coming Back To Corrie!

Will her latest scheme succeed? Not if Tom has anything to do with it. Just as Darcy has Jack right where she wants him, who should stumble upon the two? None other than Tom; uh oh he can’t un-see this vision.

Tune in next week to Hollyoaks to see how Darcy gets herself out of her latest mess!