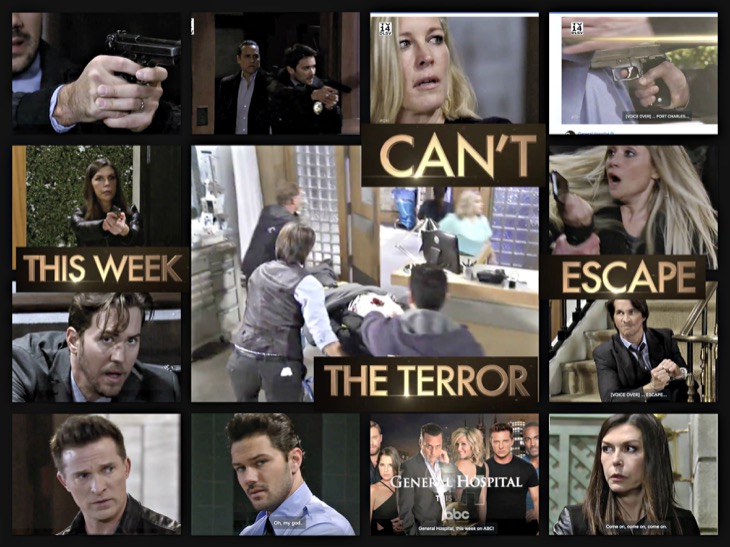 General Hospital spoilers indicate that Port Charles is going to experience quite a shake-up now that Faison (Anders Hove) is back in town. A new teaser trailer shows everyone shocked over his return (including Anna),  (Finola Hughes) someone getting shot, and Carly (Laura Wright) getting the shock of her life.

Related: General Hospital Spoilers: Port Charles Is About To Witness Sonny’s Dark Side

The short 15-second clip shows Sonny (Maurice Benard) and Dante (Dominic Zamprogna) arriving with guns to the scene, a worried Anna, and even Carly being put at risk. The promo also promises that this week no one in Port Charles will be able to “escape the terror.” And by terror, they of course mean evil mastermind Faison. Spoilers indicate that his return might prove to be a deadly one for either one of his sons: Peter (Wes Ramsey) or Nathan. (Ryan Paevey)

Many reports have indicated that actor Ryan Paevey, who plays Nathan, is supposedly leaving General Hospital to pursue other projects. If this turns out to be true, then there’s a strong chance that Faison might end up targeting Nathan in the end. It will be a father and son showdown that might prove very deadly for the young father-to-be. With Maxie being pregnant, this means that his future baby will be left without a father.

As everyone knows, Cesar Faison is a loose cannon. A lot of fans believe that Lulu (Emme Rylan) and Nathan are the ones responsible for Faison’s return. Also, Faison was always obsessed with Anna, so it’s no surprise that she is involved in this big mess, too. Of course, fans will just have to tune in to see what will happen next and is Jason (Steve Burton) and Sonny will be able to save Nathan before it’s too late.

General Hospital airs weekdays on the ABC network. Tell us, who do you think is going to end up dead next? Drop us a line with your thoughts in our comments section below. Also, don’t forget to check back with Soap Opera Spy for all the latest news, updates and spoilers on General Hospital and all of your favorite daytime television shows right here!