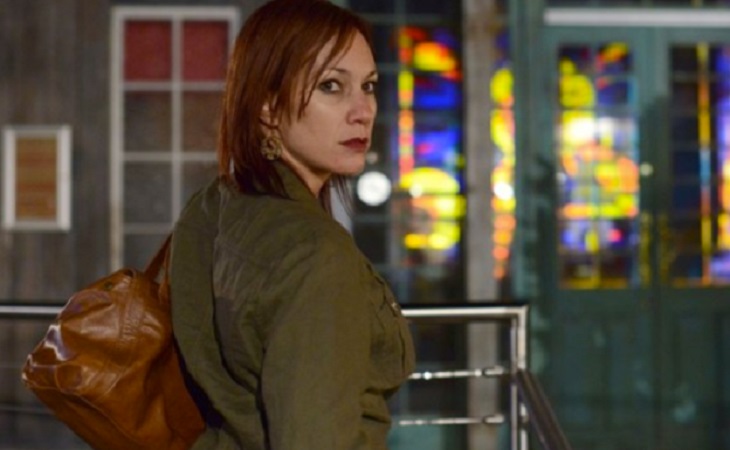 EastEnders spoilers tease that when Rainie Cross (Tanya Franks) returns to Walford this week, it is under the most solemn and saddest of circumstances. The sister of Tanya Branning (Jo Joyner) will join her sister and extended family as they gather to say goodbye to Abi Branning (Lorna Fitzgerald).

Abi is the daughter of Tanya and Max Branning (Jake Wood), and she has been unresponsive in a hospital bed ever since accidently falling off of a rooftop with her sister Lauren Branning (Jacqueline Jossa).

As EastEnders fans know, the two lovely girls were up there in the first place trying to save that scoundrel Max. The wretched man had tried to ruin Walford with a twisted revenge scheme and when it failed he contemplated suicide. Instead it was his daughter Abi who paid for his sins with her life.

Rainie will join the family at Abi’s bedside as her life support is turned off. Her current appearance is limited to this unfortunate event for the time being, but the character will return to Walford this spring, hopefully under much happier circumstances.

But since this is soapland fans, don’t count on it! Troubled Rainie has a pattern of coming to town and getting involved in concerning affairs.

During her last EastEnders appearance, in 2014, Rainie took the money and run! Can you believe that she stole all of her mother’s money and ran off after the lady pledged to help her get clean and sober?

Prior to that Rainie was caught up in a drugs plot with shady Phil Mitchell (Steve McFadden). She was also involved in the Lucy Beale murder plotline. Guess walking on the straight and narrow just isn’t her thing, huh?

But people can change, right? Maybe Rainie herself has gotten plumb and square during her time away from Walford, and will swing back into town and shock everyone with her transformation.

EastEnders’ Showrunners are keeping details of Rainie’s blockbuster spring return close to the vest, so absolutely anything under the sun is possible!