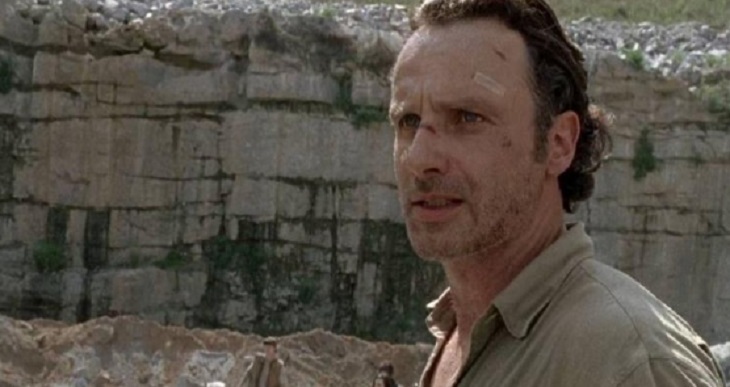 In the first half of season 7 of “The Walking Dead” Rick Grimes (Andrew Lincoln) and his group reunited. Now they are ready to take down Negan (Jeffrey Dean Morgan), but they will not have to do it alone.

“The Walking Dead” spoilers are indicating that Alexandria, The Hilltop, and The Kingdom will all join forces for the war against Negan. Now it’s been said that Oceanside may even be joining the fight as well. So with all these groups merging together they should definitely have enough numbers to finish the job, but is there yet another group that could be joining in?

Related: Who Will Die Next On TWD Season 7?

AMC’s official synopsis for 7B says, “We’ll meet new survivors in incredible places.” A picture emerged of one of those survivors and one of those places and we have it here for you. In this new photo you see Rick Grimes talking with what appears to be a woman in possibly a junk yard setting. So who is this woman?

The only teasers that was given about this person is that Rick is going to meet this person and/or persons pretty quickly. So now we must wait to see how this person and group will fit into the war against Negan. Do you think they will be helping? Are you excited to see more survivors surfacing?

If there is yet another group brought into the mix, I think it’s safe to say that Negan will have a bad day.Reports tease that the second half of the season will be dramatically different and the thrill of the fight will be back. Hopefully, we will not lose any of our main characters in the fight against Negan and the saviors, but after watching the premier of season 7 you can never count that out.

So make sure to tune in to AMC’S “The Walking Dead” on Sunday, February 12th, to see Rick and his crew rise up. Don’t forget to check often with Soap Opera Spy for all your latest Walking Dead spoilers, news, updates, and much more.

‘The Young and the Restless’ Spoilers: Phyllis Will Work For Jack Again – Fenmore’s Ducks Under Jabot’s Corporate Umbrella