‘The Young and the Restless’ Spoilers: Phyllis Will Work For Jack Again – Fenmore’s Ducks Under Jabot’s Corporate Umbrella 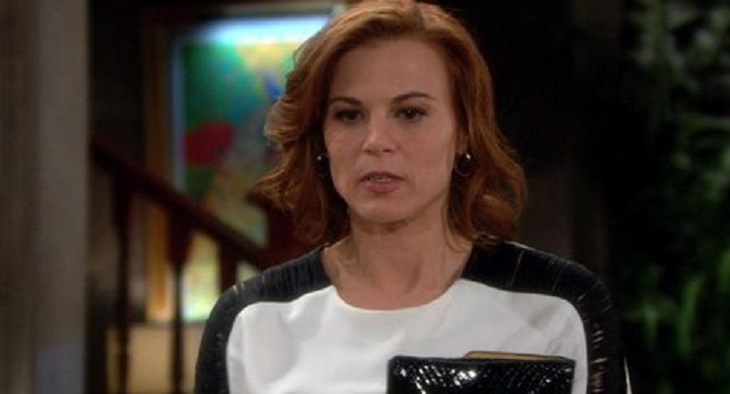 Phyllis (Gina Tognoni) told Lauren (Tracey Bregman) that she’d leave Fenmore’s on ‘The Young and the Restless’. That was conditional, based upon Jack’s (Peter Bergman) demand that his ex-wife do so in order to make his business proposal possible. But Mr. Abbott didn’t ask for his ex-wife’s exit because he knows that ‘Phack’ is dead and buried.

Phyllis pooh-poohed Jack’s weak attempt to play off his meeting with Gloria (Judith Chapman) last week as a relationship. She knew that ‘Glack’ isn’t a super couple and never could be. He despises his two-time ex-mother-in-law. But why was he meeting with her?

Lauren hadn’t put those two odd pieces together either when she went to Jack’s office, along with Phyllis, to revisit his proposal that Fenmore’s duck under Jabot’s corporate umbrella. Unexpectedly dismissed by a second sought-after investor, Lauren felt as though she had no other choice but to accept Jack’s offer. However, her reluctance to enter this business relationship is rivaled by Phyllis’ heightened feelings.

Being kicked out of a loved one’s life is never pleasant. Doing so after groveling leads one to want minimal contact with that former soul mate. So imagine Phyllis’ true reaction when she’s, in effect, rehired by Jackie-boy.

Jack’s clear desire is to have Lauren’s company serve as one of his subsidiaries. He’ll be no silent partner, which is what the head of Fenmore’s was seeking. Yet, Jabot’s financial infusion will save this enduring company.

The mutual benefits both corporate entities can realize might prove to be worthwhile to all parties. However, Jack will hold power and leverage. Faced with a vulnerable financial position, Lauren basically had no choice than to trust a Genoa City resident who’s known for his creative business dealings.

It seems as though ‘Phack’ has fully played out, as Y&R seems unlikely to reignite that relationship in the near future. So any existing tensions between the former spouses will probably serve as emotional twisters for each character, while generating some humorous scenes for all engaged viewers as Jabot overtakes Fenmore’s through forced measures.

‘The Young And The Restless’ News: The Real Reason Justin Hartley Wasn’t Nominated For A Daytime Emmy Award