The Walking Dead Mid-Season Spoilers: Who Will Die Next On TWD Season 7? 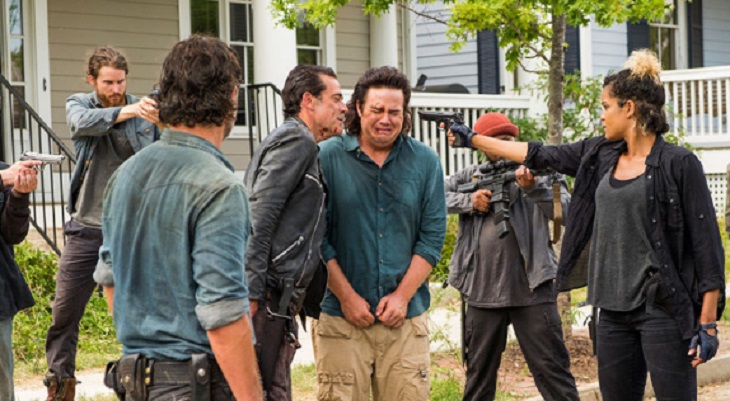 We all witnessed on the mid-season finale of “The Walking Dead,” Rick Grimes (Andrew Lincoln) and his group gathering up and getting ready to take down Negan (Jeffrey Dean Morgan).

Spoilers indicate that The Alexandrians, Hilltop, and The Kingdom are going to join forces in order to take down Negan and the saviors. So there definitely will be bloodshed, but the big question here is who will die next on TWD?

Norman Reedus, who plays the part of Daryl, recently did an interview with comicbook.com and revealed “There are a bunch of groups, and like everything on this show, everything comes to a head eventually.” Then he adds, “There are definitely scenes shot that are epic and as large.”  His interview really got fans talking. This is were the speculation comes in.

Related: What To Expect When ‘TWD’ Season 7 Returns In February – Must See Drama!

There are no direct spoilers that point to who will be the next one killed off, but with Negan taking a liking to Carl (Chandler Riggs) and his qualities, that certainly makes everyone think he is safe. Rick is the leader of the group, so it’s less likely to be him. Poor Maggie Greene (Lauren Cohan) has been through enough for it to be her who immediately dies. Then there’s Carol Peletier (Melissa McBride), who is an unlikely target since they writers have taken the time building her character and the story behind it.

So Walking Dead fans who do you think will be the next to be killed off? Stay tuned to AMC’s “The Walking Dead” to find out. Don’t forget to check often with Soap Opera Spy for all your latest Walking Dead spoilers, news, updates, and much more.

WATCH: ‘The Bold and The Beautiful’ Preview Video Tuesday, January 24