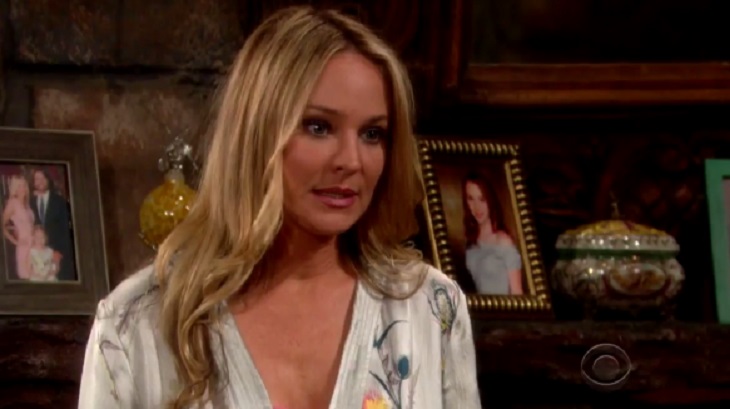 Some people seem overpowered by their impulsive natures on ‘The Young and the Restless’. Clearly Sharon (Sharon Case) is one of the most prominent Genoa City residents who fit that description. She believes that her recent attempt to contact Dylan (Steve Burton) is directly linked to his disappearance. It’s hard to argue against that conclusion.

Later, she located Paul’s cell phone in his desk, thumbed through his contacts and called her husband’s burner phone number. The audience saw Alex (Jess Webb) answer, after which Sharon claimed she’d called the wrong number and hung up.

Paul’s subsequent discovery of blood in Miami and inability to locate his son will naturally cause him to panic. Sharon’s subsequent receipt of this information will assuredly cause her to cast blame on herself. However, viewers know that Dylan played off Sharon’s call (which he assumed was from Christine, Lauralee Bell) as having been from a drug colleague named Amanda.

Alex was suspicious of that explanation. But she genuinely seemed to like Dylan and appeared to give him the benefit of the doubt.

Luther Fisk (Scott Speiser) didn’t buy Dylan’s story. Viewers and Dylan know that Fisk was having an apparent nark beaten up when Alex brought Derek (Dylan’s alias) to the meetup location. So it’s fair to speculate that Dylan may have been walking into trouble regardless of whether Sharon called, or not. The problem for Sharon is that she can’t possibly know for sure if she’s responsible for Dylan’s real, or perceived fate and will blame herself indefinitely.

Sharon’s bipolar disorder was dealt with and is being handled through medication. Viewers should place themselves in her mind set when considering if they would have acted as she did.

Yes, Sharon’s impulsive actions were wrong and did inject added danger into Dylan’s undercover efforts. But why did he have his cell phone on? It’s the lesser issue, yet a point that can’t be ignored.