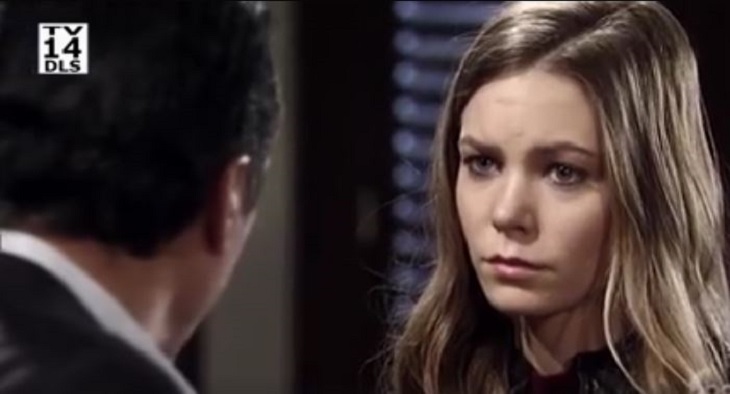 General Hospital spoilers tease that Nelle Hayes (Chloe Lanier) finally decides to tell the truth about drugging Sonny Corinthos (Maurice Benard) and making it look like they slept together. With Sonny and Carly’s (Laura Wright) relationship deteriorating will the truth be enough to save their marriage?

The newest ABC General Hospital video promo teases that “What’s done, is done, or not?” Carly Corinthos recently got a visit from her ex-husband Jasper “Jax” Jacks (Ingo Rademacher) who confessed to his part in buying the kidney that their daughter Josslyn Jacks (Eden McCoy) now has. After Nelle learns the truth of his involvement, she decides it’s time to come clean to Sonny.

In the video you see Nelle Hayes telling Sonny Corinthos, “there’s a reason you don’t remember sleeping with me, I drugged you!” So the truth is finally coming out. GH fans have awaited this day for quite awhile. Sonny is furious that Nelle tore his family apart over a lie, so will he decide to do something about it?

Now that the truth is coming out do you GH viewers believe that Carly will be able to forgive Sonny and get past all the Nelle mess? They have been through a lot over the years as a couple and have been able to put far worse than this behind them?

Once Michael Corinthos (Chad Duell) learns of what Nelle did to his parents, he definitely will not be happy. Nelle has seemed concerned about Michael, as if she wants him to forgive her, but that’s probably out of the question.  Is there anyone that thinks Nelle deserves forgiveness?

It sure did take long enough for the truth to come out, but it’s great that it is. So make sure to stay tuned to ABC’s General Hospital to see how this all unfolds. Don’t forget to check often with Soap Opera Spy for all your latest General Hospital spoilers, news, updates, and much more right here.