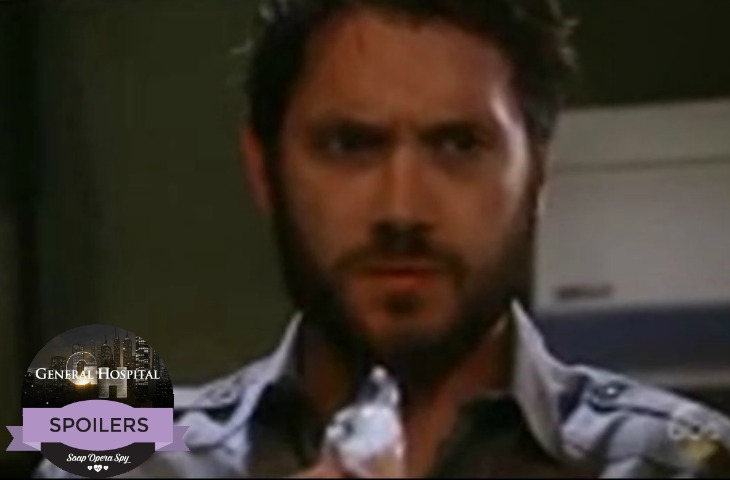 General Hospital (GH) spoilers for Thursday, April 6, 2017 bring intrigue and remorse to come while others reveal secrets and confide in each other. Thursday’s episode promises to be a great episode, one not to be missed!

General Hospital’s Michael Corinthos (Chad Duell) meets with his father, Sonny (Maurice Benard) at Kelly’s, after he had a revealing lunch with his sister, Josslyn Jacks (Eden McCoy). Michael informs him that Joss is hoping Sonny and their mom, Carly Corinthos (Laura Wright) get a divorce, how will Sonny react to that news?

PCPD Detective Dante Falconeri (Dominic Zamprogna) brings one of the Floating Rib robbers up to interrogation. He has gone through the evidence from that night and demands to know where he got those pills from. Will Ava Jerome (Maura West) finally be exposed for her part in Morgan Corinthos’ (Bryan Craig) death?

GH’s Kiki Jerome (Hayley Erin) has been able to move on with her life and love with Dillon Quartermaine (Robert Palmer Watkins), but sources show her visiting her mother, Ava and admitting that she needs to understand what happened to Morgan.

WSB Agent Anna Devane (Finola Hughes) goes to Wyndermere and tells Valentin Cassadine (James Patrick Stuart) that she didn’t know what happened between them. Meanwhile, at Kelly’s Lulu Falconeri (Emme Rylan) bumps into Dr. Griffin Munro (Matt Cohen) who asks if she is okay; she clearly isn’t. Why is Lulu so distraught?

General Hospital’s Jasper “Jax” Jacks (Ingo Rademacher) seems to be the one who has brought all this chaos to Port Charles and the Corinthos family. Spoilers reveal Carly talking to her mother, Bobbie Spencer (Jacklyn Zemen), revealing that Jax was the one who paid Frank Benson for his daughter, Nelle’s (Chloe Lanier) kidney. How will Bobbie react to this revelation, will it change her attitude towards Nelle?

Be sure to tune into ABC’s General Hospital (GH) on Thursday, April 6, 2017, to catch up on all the mysteries unfolding in Port Charles. Check Soap Opera Spy often for updates, news, rumors and spoilers!

WATCH: The Bold and The Beautiful Preview Video Thursday, April 6

Coronation Street Spoilers: Michelle Back To Corrie, Will She Choose Robert Or Steve?