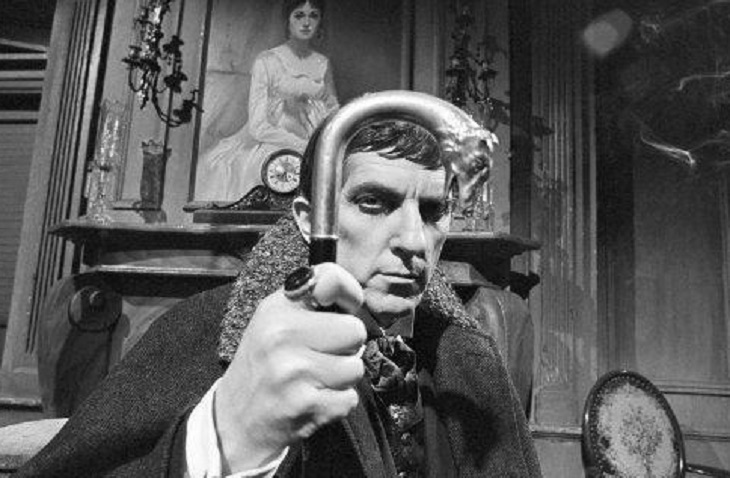 ‘Dark Shadows’ premiered June 27, 1966 on ABC, taking the 3:00 p.m. timeslot following ‘General Hospital.’ The most fascinating character, Barnabas Collins, did not appear in Collinsport until 1967.

Jonathan Frid was the distinguished Canadian actor who portrayed the tortured vampire until the gothic soap opera’s cancellation in 1971. There has been a movement by ‘Dark Shadows’ fans to have Frid inducted into the Canadian Walk of Fame in the years following his death on April 14, 2012.

In 1949 Frid was accepted at the Royal Academy of Dramatic Arts in London, England and went on to receive a Master of Fine Arts in Directing from the Yale School of Drama. As a student at Yale the up and coming actor stared in the premiere of William Snyder’s play ‘A True and Special Friend.’

Jonathan Frid’s professional career began in the theater as an understudy in the 1964 play ‘Roar Like a Dove.’ Moving on to television, Frid put his talent to work in the Canadian Broadcasting Company’s drama’s ‘Julius Caesar,’ ’20,000 Leagues Under the Sea,’ as well as ‘Our Town’ and ‘The Picture of Dorian Gray.’

The Canada Walk of Fame Honor is awarded annually to Canadians who have excelled in their respective fields.

To qualify for a nomination for the Canadian Walk of Fame the nominee must meet certain criteria. One must have been born in Canada and spent their formative or creative years in the country.

In addition, the nominee must have a minimum of 10 years’ experience in their field with an established body of work and must have had an national or international impact on Canada’s heritage.