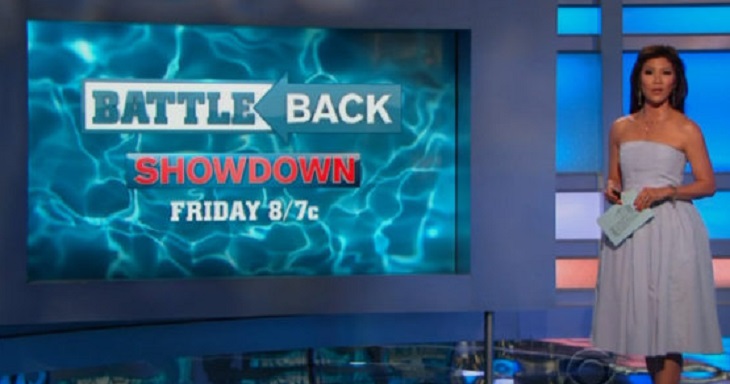 “Big Brother 19” (BB19) live feeds spoilers have shown us the new possible outcome of how the Battle Back Competition could play out. Julie Chen shared with evicted houseguest Cody Nickson that there was a possibility he would get a chance to return to the house.

The Battle Back Competition means all evicted houseguests from BB19 would have a chance to play their way back into the game. There has been 3 evicted so far, Cameron Heard, Jillian Parker, and Cody Nickson. A 4th to be named once this week’s eviction takes place, if it takes place.

“Big Brother’s” Den of Temptation can really change the game this week. As it has not been revealed as to what houseguest will be tempted, the Halting Hex holds a lot of power to whoever might receive it.

BB19 spoilers tease that The Halting Hex can “Halt” any eviction, just once, meaning no one will be sent home the week the temptation is used.

Of course, that is if the tempted houseguest takes the temptation, but let us be honest why would they not. If the Halting Hex is used this week, Jessica Graf and Dominique Cooper both will remain in the house, if not the evicted houseguest will also play in the Battle Back Comp.

“Big Brother” (BB19) rumors have been tossed around as to what the consequence is for taking the temptation this week. Julie Chen did say the house did have a chance to block anyone from returning to the game but did not share how. Spoilers are hinting that the Battle Back Comp winner returning to the house is that consequence. The Battle Back episode is scheduled to air this Friday, July 21st at 8/7c, on CBS.

Week 3 Veto Ceremony Results Are In – Jessica Or Dominique To Be Evicted?

Who do you think will be tempted this week? Do you think they will use the temptation keeping Dominique and Jessica in the house? Leave us a comment below on your thoughts on the Battle Back Comp. Then check back with Soap Opera Spy to get all the latest information on “Big Brother” right here.