Big Brother Spoilers: Josh And Mark Go At It – Things In The BB19 House Heat Up 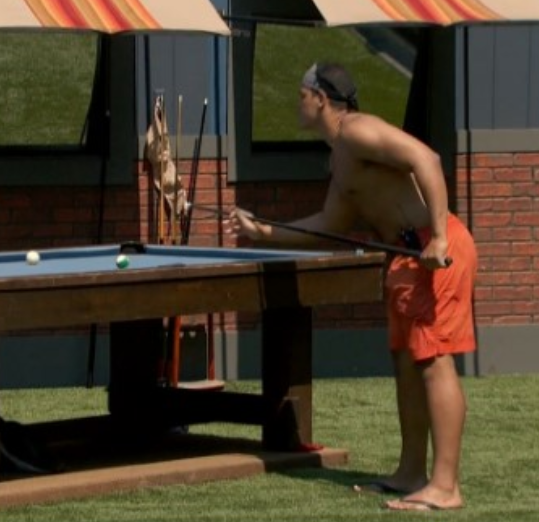 “Big Brother” (BB19) houseguest gave the live feeds quite the show. The pickle juice was not the only thing ‘hot’ this afternoon in the “Big Brother” house. Mark Jansen and Josh Martinez entered into a game of pool (8 ball), with what seemed like a harmless bet. The loser was to drink a concoction of pickle juice and hot sauce. It came down to one ball, Josh believing he won while Mark and the others said he double hit the ball when he finally sank the 8 ball, which is the same as scratching meaning you automatically lose. No way Josh was accepting that, the two begin to argue, and it ended with Mark throwing the pickle juice and hot sauce in Josh’s face when refused to drink it.

“Big Brother” live feeds continued as Josh went inside to wash his face only to return with ketchup and mayo, a chase ensued through the backyard. Surprisingly no punches were thrown however, the words were flying and they packed a punch. Josh highly upset that Mark was saying he was not a man of his word, so Josh calls Mark out about plotting against Paul Abrahamian and Christmas Abbott during week one (a seed planted by Cody Nickson, before being evicted from the house).

“Big Brother” Alumni Paul heads outside in attempts to calm Josh down, but no such luck, Christmas tried as well. Josh, unable to stop himself, just continued with his rant calling others out as well. Jessica Graf and Josh went a round or two, as well as Josh and Elena Davies, Josh just continued on about conspiracies, liars, and disrespect. We have seen Josh’s rants before, this one was by far his best performance, he just went to crazy and fast. The houseguest have only been in the house 27 days, while it has been great to watch the crazy, there is still quite a bit of time to go.

Related: Big Brother 19 Spoilers: Week 3 Veto Ceremony Results Are In – Jessica Or Dominique To Be Evicted?

Please leave us a comment below and let us know what you think of this very explosive season of “Big Brother” (BB19). Then check back at Soap Opera Spy to stay up to date on everything going on in the “Big Brother” house.

General Hospital News: This Photo Of Kimberly McCullough Napping With Baby Otis Will Melt Your Heart

The Young And The Restless Spoilers: Nikki and Jack Share A Kiss, Sparks Fly – The End Of Niktor?