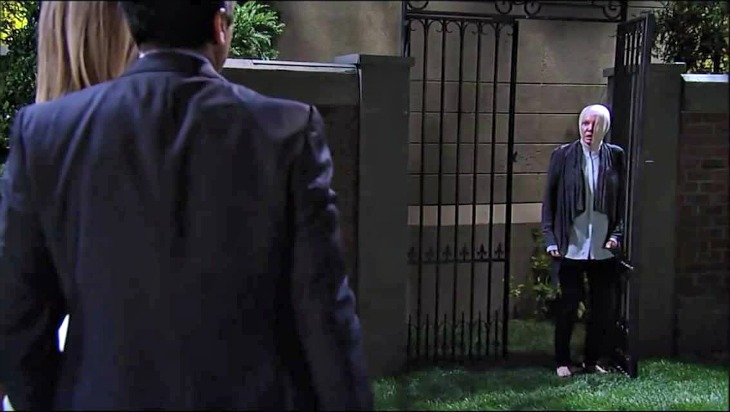 Tuesday’s July 18 episode of General Hospital begins with Julian (William DeVry) arriving to the hospital and asking the nurse about Ava (Maura West). Ava was released earlier in the day.

Sonny (Maurice Benard) and Carly (Laura Wright) start to leave Morgan’s grave and see Ava (Maura West). Ava admits she’s a horrible person. Sonny tells Ava if she finds a plastic surgeon that can fix her face she needs to rethink that. She’s not going to walk away with Morgan’s death.

Carly calls Ava a gutless cruel monster with a face as ugly as her soul. They leave and Felix (Marc Samuel) arrives. Ava makes Felix return to the car so she can be alone for a few minutes.

Later Julian arrives to Ava’s as Felix is taking the bandages off. Ava asks Julian to cover all the mirrors. Felix says it’s time to put antibiotic ointment on her face then show her how to use the mask.

Ava tells Felix she can do this part herself and asks him to leave. Ava asks Julian if she looks hideous. Julian tries to reassure her. Ava suggests he move out and asks him to leave her alone for now. Julian reluctantly agrees and leaves. Ava walks over to the mirror and pulls the sheet off. Ava looks in the mirror and says Carly was right; I did this to myself, karma. 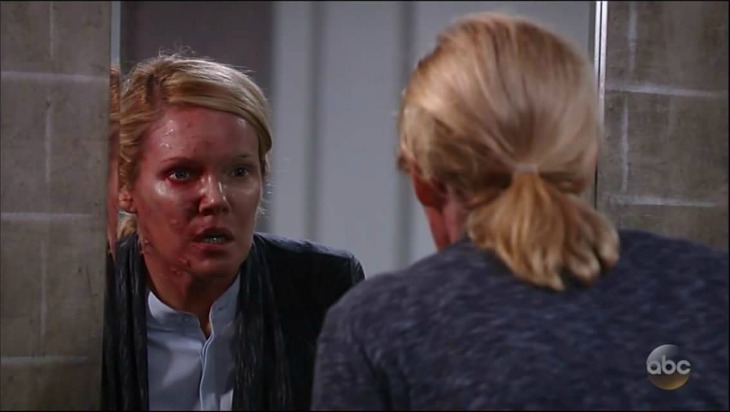 Curtis (Donnell Turner) tells Jordan (Vinessa Antoine) that Stella (Vernee Watson) is almost back to her old self. Curtis feels guilty for not considering Stella’s sacrifices while she raised him and it’s a game changer. Curtis is going to put Stella first and breaks it off with Jordan. Jordan going to miss him but agrees it’s the best thing to do.

Laura (Genie Frances) gets a call from Joss (Eden McCoy) there’s an issue at camp. Laura arrives to camp and sees Charlotte (Scarlett Fernandez) sitting alone on the bench. Laura tells Charlotte that Joss couldn’t reach her Papa. Charlotte worries Papa is mad at her and asks if it’s true about Nicholas. Laura says Papa isn’t upset with her and it is true. Valentin  (James Patrick Stuart) arrives and Charlotte runs to him.

Valentin hands Laura papers showing he has immediate visitation for three hours with Charlotte. Valentin tells Laura that Spencer (Nicholas Bechtel) is a bully and Nicolas faked his death but she can’t admit it. Laura slaps Valentin’s face. Valentin tells her never take it out on Charlotte again and leaves. Laura tells Joss to get Spencer. Later Joss returns and tells Laura they can’t find Spencer. Laura has a feeling Spencer is actually missing.

Watch Steve Burton Rock Out With His Son Jack

Sonny and Carly arrive to the Metro Court. Carly tells Sonny they won’t be free until they let Ava go. Carly hopes they have moved on by the time Ava gets plastic surgery. Sonny gets a call and tells the caller not now and hangs up. Carly persists asking what the call was about. Carly reminds Sonny he said it was possible to leave the business but it’s really not.

Spencer lands at the bottom of the stairs in a locked basement. Spencer shouts to the locked door they can’t keep him in there. Spencer doesn’t have his phone so he starts looking for a way out. Spencer climbs a chair to throw the rope to land on a nail near the window. Spencer falls to the floor. He stands up breaking his glasses. He puts the glasses on saying how can he escape now when he can’t see.

Valentin tells Charlotte that Nicolas made poor choices and disappeared. Spencer misses his father and is taking it out on her but she won’t have to see him ever again. Charlotte tells Papa she made a gift for him at camp and it’s almost done. She made Nina one too and wonders when she’s coming home. Valentin tells Charlotte they’ll all be a family again and no one can stop them. Not even Spencer.