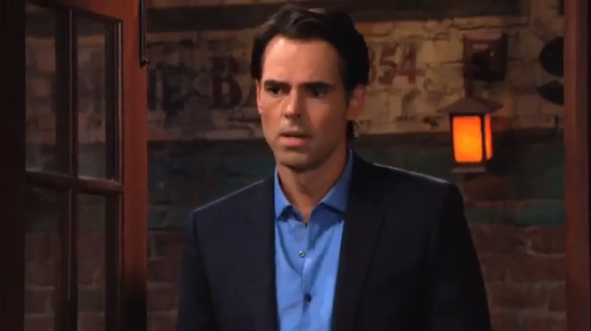 This isn’t news but needs to be repeated: Billy Abbott (Jason Thompson) is a disaster on ‘The Young and the Restless’. He’s not young anymore. And, trying to pass off his self-destructive behavior as restless is nothing more than cheap verbal product placement. No, Victor (Eric Braeden) was right all along, Billy-boy is a screw-up. At this point, even Jill (Jess Walton) admits it.

Victor is gloating because news of the ‘Philly’ reveal is saturating social media via an old-school television interview. Jack (Peter Bergman) revealed something totally unexpected to a reporter (Yvette Nicole Brown, who plays Dani on ‘The Odd Couple’) during a planned Abbott-Winters Foundation shot. He blurted out that Phyllis (Gina Tognoni) was involved with Billy.

You Might Also Like —> Jack Accused of Abuse – Phyllis Hospitalized, Billy Begs for Love – Victoria Fed Up with Jill

In days of discretion, meaning the distant past, that reporter and her cameraman would have ‘lost’ that filmed outburst. In today’s world, Jack’s digitally recorded statement was seen as a money-maker and regard for all lives that were about to be affected was instantly rejected. And, how is it that society has evolved? Yes, in various ways it’s done the opposite.

Phyllis shares responsibility this predicament. But, Billy is the greater cad. He wasn’t the one who Marco (Peter Bergman) damaged. He wasn’t Victor’s target, in this instance. Why did Billy act as he did? Yes, his free will muscles weren’t developed properly so he behaves like a wild animal.

Middle-aged, unable to sustain a lasting relationship and only able to spend limited stretches of time with his children, Billy thinks the world has wronged him. On occasion he’ll admit that he’s at fault, or say that he’s intentionally acted badly. But, regardless of those words, his ongoing actions simply create trouble for everyone he’s connected to.

Victor hasn’t liked many of the people his children have chosen to love. But, Billy stands as the ‘Moustache’s’ main target. And, in considering all that’s transpired during this calendar year, how can anyone claim that Victor’s gut instinct about this man-child is wrong?

Billy might reply by saying that all broken clocks are right twice a day. But, that snarky retort would fail in its attempt to shift blame. Unless something remarkable happens to change his life, there’s also little reason to hope that Billy will improve all that much, ever.