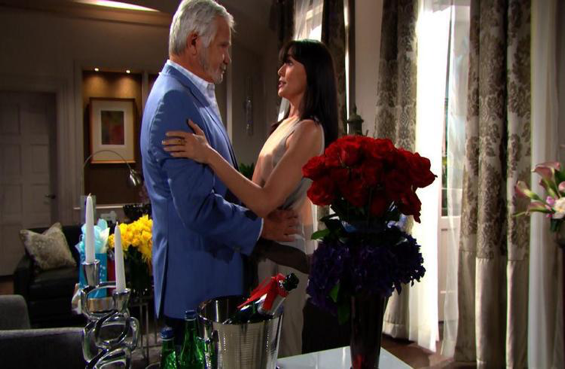 “The Bold and the Beautiful” (B&B)  spoilers speculate that this week Quinn (Rena Sofer) will continue to be worried about the ongoing tension between her soon to be fiancée and his family in regards to their planned upcoming nuptials.

Eric (John McCook) and his family continue to disagree on his decision to wed Quinn despite Steffy’s (Jacqueline MacInnes Wood.) continued disapproval. At this point, Eric does not see Quinn in the same light as the rest of his family. The Forrester family continue to advise him that he is making a big mistake for not seeing Quinn for who she really is.

Eric truly believes Quinn is a changed woman, in every sense of the word. Bold and the Beautiful viewers know otherwise since we have seen Quinn revert back to her manipulative ways. Not two weeks ago, we saw Quinn attempt to manipulate and interfere in Liam (Scott Clifton) and Steffy’s relationship. Viewers saw Quinn bring Ivy (Ashleigh Brewer ), who is also Eric’s niece and is planning to use her to put a wedge between Liam and Steffy so Wyatt (Darin Brooks) and Steffy will remain together and not apart.

Quinn went so far as to resort to making Ivy look like Steffy in order to draw Liam in to her realm. Will her plan work? How will Eric react if he finds out the lengths that Quinn has gone too? Will her secrets be exposed at the wedding?

We all have seen Quinn showing how much she does not like Eric’s family being against their upcoming wedding. Quinn has been having doubts about getting married. Will she back out at the last moment or will she continue on with the ceremony despite the Forrester family efforts to end their wedded bliss?

Eric will continue to reassure his upcoming bride to be that she is the most important and real thing going on in his life since his wife’s death. Quinn questions Eric on if he is really prepared to distance himself from his entire family all to have her. How will Eric respond?

You Might Also Like —> Ridge Fumes Over Wedding Email, Steffy Clings to Failing Plan – Quinn Insists She’s Not the Enemy

Many internet sources are speculating that Quinn will be a runaway bride and realize that she cannot marry Eric afterall and risk the end of her own son’s marriage since he made it clear that if she weds Eric that Wyatt’s marriage with Steffy will only be the beginning of the end. Will Wyatt be the one thing that makes Quinn change her mind? Will she choose her happiness or her son’s? Stay tuned to see what shocking decision she will soon have to make!