‘The Young and The Restless’ Spoilers: The Old Jack Is Back – Declared War Against Victor Newman 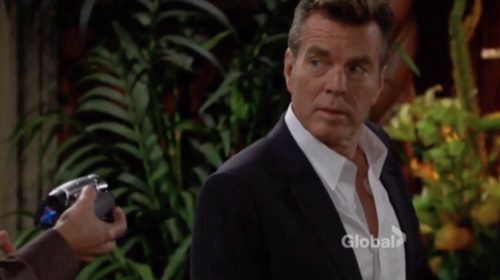 Jack (Peter Bergman) tried the peace sign on ‘The Young and the Restless’. But, embracing the peace sign, chanting Kumbaya, and wishing evil (Victor, Eric Braeden) away for the past year didn’t work. So, Jack turned away from emotionally-based philosophies and back to logic. Now, he’s preparing to battle the ‘Moustache’ once more.

Y&R is currently transitioning back to what long-term viewers want, or claim to want. The good old days, where characters were written into a corner and just keep turning and turning and turning are seemingly being revived. Now, this isn’t to say that a return to traditional Genoa City thinking won’t work. But, when various characters replay their old patterns every ranter better keep on cheering. Critiquing requested character-driven drama would reflect badly upon all who offered that suggestion.

You Might Also Like —> Jack Quits, Says Old Jack Is Back – Phyllis Stirs Up Trouble – Jill Makes Travis an Offer

Phyllis (Gina Tognoni) became vulnerable within the last handful of years. The actor switch from Michelle Stafford to Tognoni allowed an experiment to take place. ‘Red’ went from viscous to tolerant, from snarky to smitten and from wild to withheld. Then, the Marco (Peter Bergman) storyline sailed, eventually Y&R’s lead executive producer and head writer were deposed and a new vision began to take old. As that happened, whiffs of ‘Red’s’ scent were inhaled by the audience.

The glory days of Jack and Victor were seen ages ago. Countless confrontations that were based upon power, money and love, or the lack of it. The male counter to iconic battles that Katherine (Jeanne Cooper) and Jill (Jess Walton) used to have. Bergman and Braeden became one of the best duos duking it out in daytime. Now, they’re being given another chance to dig deeper in their golden years.

If Jack truly kicks Phyllis to the gilded pavement and reignites corporate skirmishes with Newman Enterprises, there’s no telling what will come next. Since Victor’s bizarre Peruvian drug lord scheme resulted in Jack loosing his wife, might a renewed emphasis on Nikki’s (Melody Thomas Scott) fondness for Mr. Abbott be far behind? How better to get back at Victor than to remarry his wife?