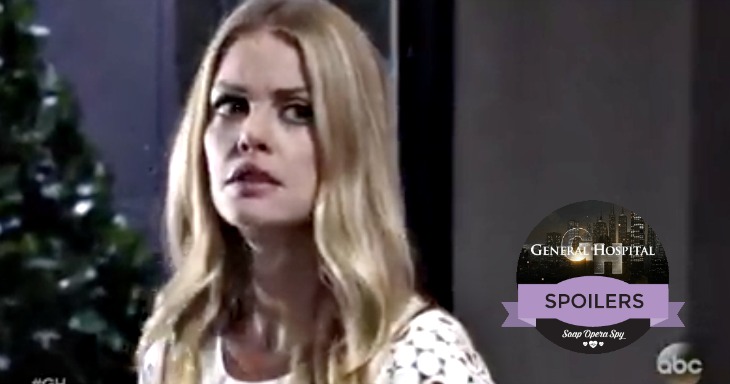 We all have been witnessing on “General Hospital” (GH) Nathan’s (Ryan Peavy) ex Claudette Beaulieu (Bree Williamson) scheming and doing whatever she can to cause problems for Nathan and Maxie (Kirsten Storms). It sure looks like she isn’t going to stop anytime soon.

According to the newest ABC General Hospital Promo “His scheming, stalking, conniving ex drops a brand new bombshell.” We recently seen Claudette asking Nathan for help and when he refuses she tells him to do it for her and her daughter.

In the video you see Nathan telling Claudette to tell him the truth for once in her life. So do you think Claudette is up to her scheming ways and gonna try to tell Nathan they have a daughter together?

We all know Claudette has been with Nathan the cop, Griffin (Matt Cohen) the priest and now she says she hooked up with a guy who is in prison. So is this a start to a “who is the baby’s daddy” storyline? All the soaps sure do like to use that storyline a lot. So it would not surprise us any.

It looks like Claudette is willing to do anything to get what she wants. Which is what exactly? She says she knew her and Nathan were over but yet she sure keeps doing whatever she could to keep him close.

Nathan told Claudette that she ruined his life once before and almost did it again. Do you think she will keep on until it causes him to lose Maxie? Would you rather see the writers put her with Griffin and keep her out of Nathan’s life? Or would you like to see her leave town?

So with Claudette telling Nathan she has a daughter that’s gotta make you wonder where she is cause we certainly have not seen her with a kid and why is this just now coming up?

I guess we shall all see soon where this storyline is heading. So be sure to stay tuned to General Hospital to find out. Don’t forget to check often with Soap Opera Spy for all your latest General Hospital spoilers, news, updates, and more.