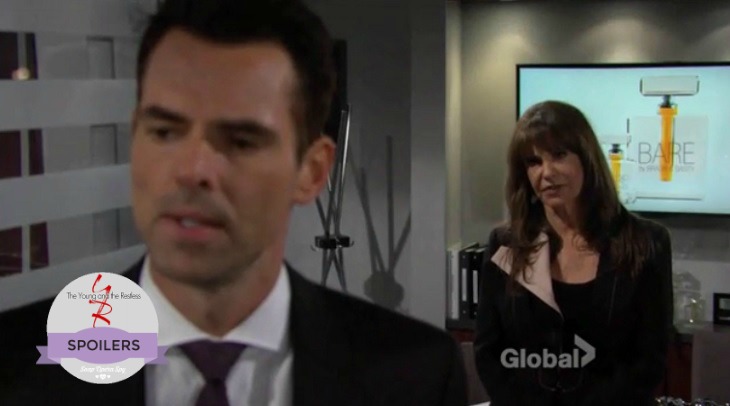 “The Young and the Restless” spoilers for Tuesday, November 29, tease that Nick (Joshua Morrow), Dylan (Steve Burton) and Sharon (Sharon Case) will head to the courtroom.  A bitter battle is about to get underway. However, Dylan will hope that Nick will come around on the idea of visitation. He’ll do his best to make Nick see the light.

Y&R spoilers say Dylan will urge Nick to forgive Sharon. He’ll think it’s time to let go of the past for Christian’s sake. Nick may not be willing to ignore Sharon’s betrayal. He feels like he’s the only father that Christian needs anyway.

Will Nick change his mind about letting Christian spend time with his substitute parents? We’ll have to wait and see, but it’s clear that things are about to get interesting. Everyone caught in this Christian war will get a huge shock later this week. Stick with “The Young and the Restless” to see what’s in store.

Meanwhile, Jill (Jess Walton) will have some advice for her son. She realizes that Billy (Jason Thompson) is keeping a secret involving Travis (Michael Roark). Jill also knows Victoria (Amelia Heinle) could get hurt. Monday’s preview video shows Jill saying, “Don’t you dare let Victoria walk down that aisle without telling her.”

Billy will ultimately decide to come clean about some or all of the drama. “The Young and the Restless” spoilers reveal that Billy will track down Victoria so he can spill his news. Billy is in the loop on Travis’ hookup with Michelle (Kelly Frye). Will he tell Victoria about their encounter? It certainly looks like he’s ready to make a confession.

Related: Family Divided – Victor Forces Nikki To Choose A Side In Dylan And Nick’s War Over Christian

When Billy declares that he can’t keep quiet anymore, Victoria will be taken aback. She’ll beg Billy to tell her what’s going on. Billy might blurt out that her fiancé cheated or he may just tell Victoria to ask Travis what really happened. Either way, Victoria will find out that Travis has been deceiving her again.

By Wednesday, Travis will ask Victoria what she wants from him and she’ll snap that she wants the truth. Y&R rumors hint that big trouble is brewing. We’ll give you updates as other details emerge. Stay tuned and don’t forget to check Soap Opera Spy often for the latest “Young and the Restless” spoilers, rumors, updates and news.

‘The Walking Dead’ Spoilers: Shocking Clues Hint Carl Grimes Will Be Killed Off On ‘TWD’ Season 7