‘The Walking Dead’ Spoilers: Shocking Clues Hint Carl Grimes Will Be Killed Off On ‘TWD’ Season 7 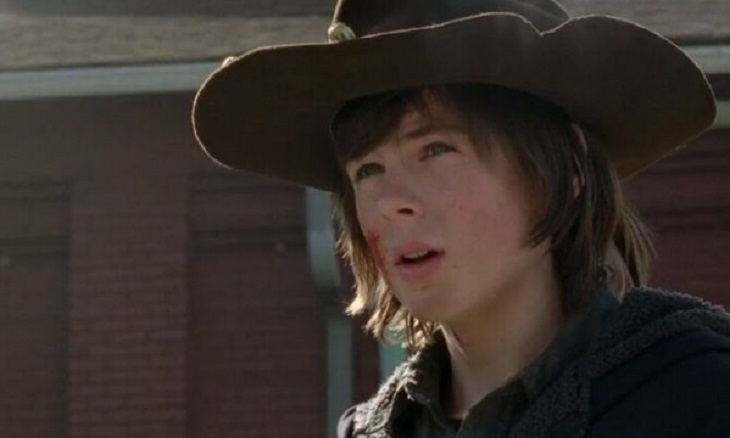 The Walking Dead spoilers tease that there will be another major death on TWD Season 7, and it will be happening any episode now.  Of course, if we have learned anything over the last seven seasons of The Walking Dead, it’s that no one is safe during a zombie apocalypse, especially with psychopaths like Negan running around.

Earlier this month we reported that Chandler Riggs, the teen that plays Carl Grimes, had been accepted to Auburn University and was making plans to go to college.

Of course, this news spurred rumors that Carl Grimes would be killed off.  But, technically Riggs could still go to college and film scenes for AMC’s Walking Dead.

However, new clues indicate that Carl Grimes really is on his way out.  Carl’s father took to Instagram and shared a photo of his son Chandler, and implied that Riggs had wrapped up his time on The Walking Dead.

Riggs’ father wrote, “Completed 7 years on TWD! #freedom #thewalkingdead.”  We can all agree that “freedom” is a pretty interesting choice of hashtags.”

Also according to Huffington Post, Riggs’ father also wrote a lengthy post on Facebook stating, “7 year contract completed! Grateful to AMC, Cast & Crew, TWD fan base, and especially Chandler for always being 100% dedicated. Whether is was getting up at 4 AM, working in the freezing cold past 2 AM, leaving his friends and carefree kiddom behind, scrambling to make up missed schoolwork, he has done it without complaint and always made me proud & amazed to be his dad!”

What do you guys think?  Are we about to say goodbye to Carl Grimes?  Let us know in the comments below and don’t forget to check SOS for more The Walking Dead spoilers and news.

‘The Bold and the Beautiful’ Spoilers: RJ Helps Ridge Recreate Past Romantic Moment – Determined To Stop Brooke And Bill’s Wedding