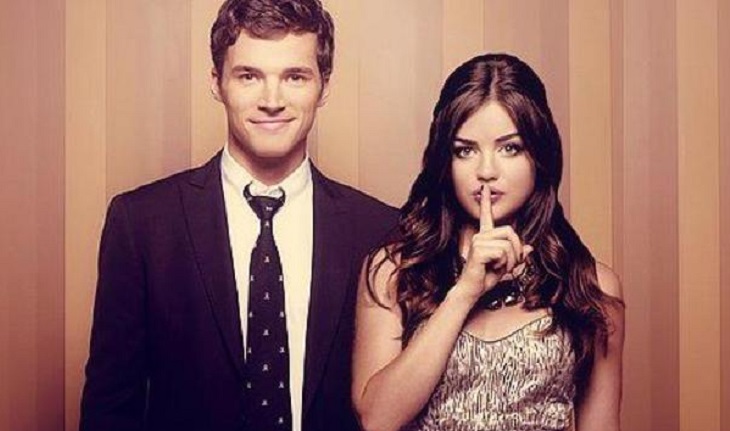 According to the show’s producer, Marlene King, Ezra and Aria may not be getting married after all. In fact, the couple may not be a couple for much longer. King had an interview where she revealed that the couple has been dealing with a lot of lies and secrets. The lies and secrets are big enough that their relationship could be over for good.

In the interview, King discusses the secrets that Aria is keeping from Ezra. Aria is keeping the fact that she as well as her friends covered up the death of Elliott (Huw Collins). They also buried the doctor underground to keep the police from finding out the truth. For some reason, Aria doesn’t want to share this information with Ezra. Aria feels like she can’t accept his proposal if she can’t be honest about what she has done.

In addition to keeping Elliott’s death a secret from Ezra, Aria is keeping another secret from him. Ezra’s ex Nicole (Rebecca Breeds) called him to get in touch with him. Aria answered his phone and found out that she is still alive. Instead of telling Ezra about the phone call, she decided to delete the call from his phone. She also never told Ezra about the phone call. As far as he knows, Nicole is still dead and he is ready to move forward with Aria.

Aria does give Ezra an answer to his proposal, but that doesn’t guarantee that they will get married. King claims that there is still a bumpy road ahead for the lovers. According to spoilers, Ezra gets a call from someone. The caller may be his ex love Nicole. If Nicole is the one calling, Aria is going to be in hot water. She will have to explain why she didn’t tell him about the phone call. She will also have to deal with Nicole coming back into Ezra’s life after he believed she was dead. Can the troubled couple overcome her secrets in order to get married? Will Nicole be the one who comes between the pair?  Let us know what you think in the comments below!

‘The Young And The Restless’ Spoilers: Natalie Rightfully Concerned By Chloe’s Return To Kevin’s Life