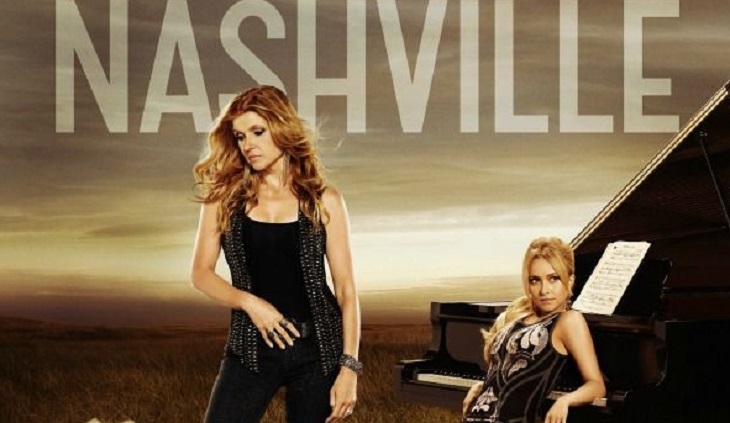 Nashville spoilers tease that CMT has finally revealed the country music drama’s Season 5 premiere date.  Nashville is set to return for its 22-episode, fifth season premiere on Thursday, January 5, 2017 on CMT at 9 p.m. ET., not in the Fall (December 2016), as previously reported!  Charles Esten, who portrays Deacon Claybourne, on the series says, “Expect Season 5 to be the best season yet!”

Fans of Nashville will be excited to know that stars, Hayden Panettiere, Connie Britton, Charles Esten, Sam Palladio, Jonathan Jackson, Clare Bowen, Lennon Stella, Maisy Stella and Chris Carmack are all set to return to the series that CMT picked up after ABC cancelled it after four seasons. Unfortunately, the one thing we do know for sure is that we will be saying goodbye to Will Chase (Luke Wheeler) and Aubrey Peeples (Layla Grant).

Are you excited to see most of the cast returning?

Since Nashville’s main stars Connie Britton (Rayna) and Hayden Panettiere (Juliette) are returning, that should mean that Juliette’s fateful flight home to her daughter and Avery (Jonathan Jackson), should not be the last we see of the troubled songstress; writers are going to have to figure out how to explain the disappearance of Juliette’s plane.  However, rumors popped up today that Connie Britton’s character Rayna may be exiting in Season 5.

Nashville spoilers tease that creator, Callie Khouri wants to deal with the collapse of the music industry. She wants to bring to light that services like Spotify and Pandora are bankrupting the music industry; an industry that is already very difficult to “make it” in. She also wants to show aspiring musicians that you can’t just show up in town one day, hit Music Row, create a record and have an instant hit on your hands.

CMT and Callie Khouri are also in agreement as to how the storylines for Nashville’s Season 5 are going to change. They want to tell stories that are more emotional and less soapy. The series creator also thinks that Nashville will be a great fit for CMT, as the music network channel moves more into scripted television series.

Be sure to check out CMT’s Nashville, when it returns on Thursday, January 5th, 2017 and check back often for updates, news and spoilers!

Nashville Shocker Connie Britton May Not Be Staying On The Show