In Memoriam: A Tribute To Soap Opera Stars We Lost in 2016 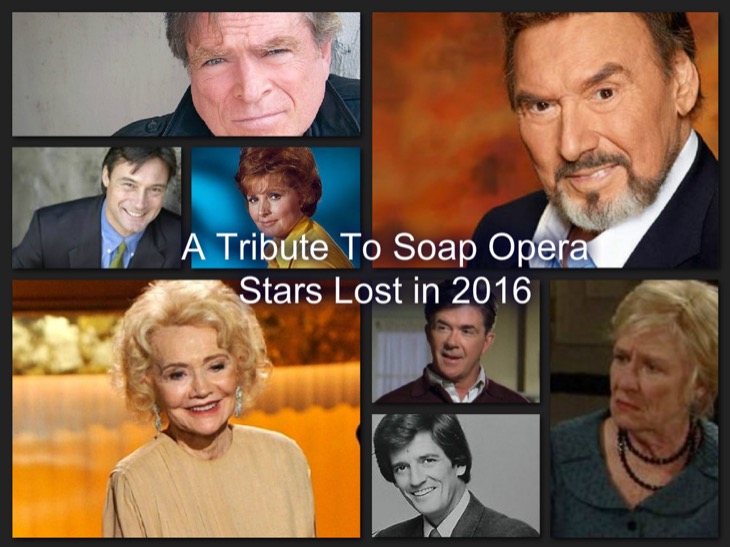 In a year when the world lost great talents from every entertainment genre, fans of soap operas mourned the deaths of several notable icons of daytime drama.

Mike Minor – ‘All My Children’ – Brandon Kingsley
Famous for portraying Brandon Kingsley, one of Erica Kane’s many lovers, Mike Minor died at the age of 75 on January 28 from cancer. ‘All My Children’ fans will remember that Brandon came along and made Erica the spokesmodel for Sensuelle Cosmetics Company of which he was CEO. Erica divorced third husband Tom Cudahy [Richard Shoberg] to follow her dreams.

Agnes Nixon – Creator of ‘All My Children’ and ‘One Life to Live’
Agnes Nixon died on September 28 at the age of 93. The creator of such icons as Erica Kane [Susan Lucci] and Vitoria Lord [Erika Slezak], fans were invested in the characters Agnes created. Agnes Nixon also had a hand in creating the half-hour ABC soap opera ‘Loving’ which later became known as ‘The City.’

Larkin Malloy – ‘All My Children’ – Travis Montgomery
Larkin Malloy portrayed Travis Montgomery, one of Erica Kane’s many husbands, on ‘All My Children.’ Larkin died on September 29 at the age of 62 from complications following a heart attack. Fans of ‘AMC’ were still reeling from the news of Agnes Nixon’s death when Walt Willey [Jackson Montgomery] shared the sad news of Larkin’s passing.

Patricia Barry – ‘Days of Our Lives’ – Addie Horton Williams
Patricia Barry passed away on October 11 at the age of 93. Her publicist released a statement revealing that the soap opera star died peacefully at home. Patricia’s other soap roles included Peg English, mother of Brooke English [Julia Barr] on ‘All My Children.’

Alan Thicke – ‘The Bold and the Beautiful’ – Rich Ginger
Alan Thicke was best known for his role as Dr. Jason Seaver on the ABC family comedy ‘Growing Pains.’ The actor portrayed Rich Ginger on ‘B&B’ from 2006 through 2009. Thicke died at the age of 69 following a heart attack which was later reported as a ruptured aorta on December 13.

Barbara Tarbuck portrayed Lady Jane Jacks, mother of Jasper ‘Jax’ Jacks [Ingo Rademacher] and Jerry Jacks [Sebastian Roche] from 1996 through 2010. The actress died on December 27 and the official cause of her death is listed as a rare fatal brain disorder known as human mad cow disease. Lady Jane had recently been mentioned by Jax as he left Port Charles to visit his ailing mother in Australia.

‘The Young and the Restless’ Spoilers: Devon Should Have Listened To Lily – Crash Could Have Been Avoided

‘The Young and The Restless’ News: Michael Muhney Responds To Fans Asking For His Return To Y&R