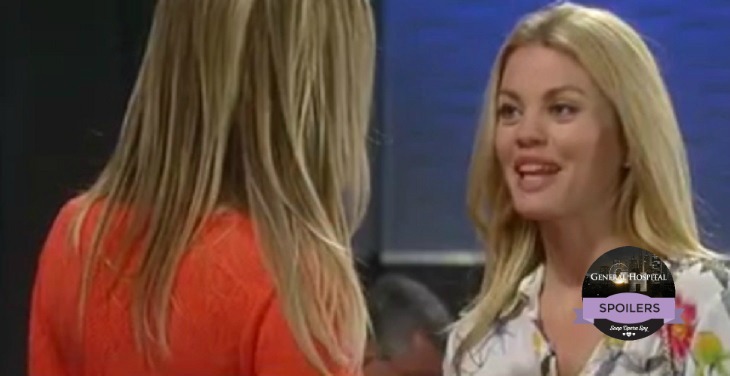 It looks like the claws are out and Laura Webber (Genie Francis) is ready to take her son Nikolas Cassadine’s (Tyler Christopher) “widow”, Hayden Barnes-Cassadine (Rebecca Budig) down. Laura confronts Hayden, telling her that if she thinks she is going to take Nikolas’ bones, she will have to go through her first! Seems Laura is done playing nice with Hayden, and will not take her attitude any more.

General Hospital’s Dr. Griffin Munro (Matt Cohen) has reached his limit and has had enough of Claudette “CJ” Boland (Bree Williamson) and her surprises. Maybe he is finally going to stop hiding the truth from Maxie Jones (Kirsten Storms) and finally tell Nathan West (Ryan Paevey) that he is the one who was having an affair with Nathan’s wife at the time, and he is the one Nathan shot. What does this mean for Nathan’s future, with his job and with Maxie?

Nathan continues to reaffirm his love for Maxie and insists that his life “begins and ends with her”. With Claudette around, is Maxie secure enough to believe him, or will she fall back into her scheming ways to make sure that Claudette stays away from her man! Seems Maxie, Griffin and Nathan are not the only ones who want Claudette to leave Port Charles.

Nathan’s sister/cousin, Nina Reeves (Michelle Stafford) is also wondering why Claudette is still in town after Claudette told Nina she was leaving? As GH fans, we can’t help but wonder the same thing. Is she in town to rekindle her romance with Griffin, now that she has discovered he is living there, or is she there to continue to manipulate Nathan?

Dr. Hamilton Finn (Michael Easton) claims that he is one step closer to saving everyone who has “got this thing”. With him holding a syringe, it makes him look very guilty of being the General Hospital serial killer. Valerie makes an important discovery could she be the one who walks in on Dr. Finn with the needle filled with an unknown substance?

GH’s mobster, Sonny Corinthos (Maurice Benard) has a mysterious meeting with someone who tells him, “We have been ready for your request.” We have to wonder if Sonny and Carly (Laura Wright) have caught on to Jasper “Jax” Jacks’ (Ingo Rademacher) sudden urge to leave town and his continued resistance of keeping Nelle Hayes (Chloe Lanier) in town. Does this have to do with Josslyn Jacks’ (Eden McCoy) kidney donor, Nelle, and Sonny is doing more secret testing? Or does Sonny have something entirely different up his sleeve?

Be sure to watch ABC’s General Hospital on Thursday August 18th and check Soap Opera Spy often for updates, news and spoilers!

‘Days of Our Lives’ Spoilers: Philip Lashes Out at Belle Over Record Label Drama – More Tension for Belle and Shawn, Claire Conflict Heats Up