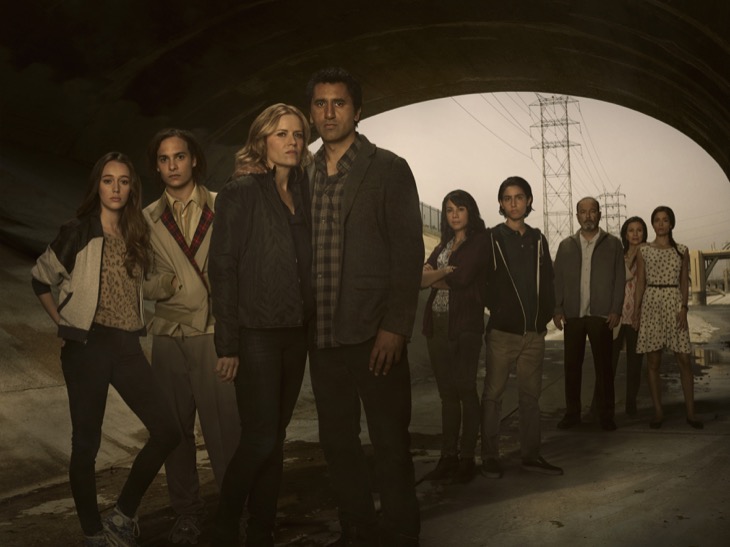 ‘Fear The Walking Dead’ 2B will soon be returning to AMC with the second half of season two. In the final episodes of season 2A, Victor Strand (Colman Domingo) promises his dying lover, Thomas Abigail (Dougray Scott) that he will poison himself and they will die together and continue on together in the land of the undead. With Celia (Marlene Forte) to watch over and protect them, or course. However, when Thomas’ time came, Victor shot Thomas to prevent him from returning as an undead, and doesn’t fulfill his promise to end his own life. Because of his actions, Victor has been abolished from the Abigail Ranch.

Meanwhile, Daniel Salazar (Ruben Blades) is so confused about his own past behaviors, and conscience. The images of his deceased wife Griselda (Patricia Reyes Spindola) that are haunting him and a cellar full of undead souls that Celia is protecting. Daniel sets the cellar on fire, releasing his pain and all of the burning walkers into the night.

Madison Clark (Kim Dickens) and Alicia Clark (Alycia Debnam Carey) have fled the burning ranch in a pickup truck, driven by Victor Strand, who has returned to save them. There is a connection between Madison and Victor that is hard to define. Nick Clark (Frank Dillane) refuses to leave with his mother and sister. Nick is becoming untouched with reality and feels safer amongst the undead than with the living.

Travis Manawa (Cliff Curtis) had left the ranch prior to all of the confusion in search of his son Chris (Lorenzo James Henrie), who ran away because of his fear of hurting others around him. When Travis does find Chris, he chooses to stay with Chris and help him through his confusion rather than return to his girlfriend, Madison.

When Season 2B airs on August 21, 2016 the fans will have the opportunity to see the answers to many of their questions. Will Victor, Madison and Alicia find safety from the ranch at the yacht ‘Abigail’? Did Daniel die in the fire at the ranch and will return as an undead himself? Did Daniel escape the fire unscathed? What will become of Nick as he walks aimlessly with the undead? Will Travis and Chris return to the ranch only to find that they no longer have any family and friends left there? What do you think will happen when the show returns? Let us know in the comments below!

‘The Young And The Restless’ Weekly Promo Video: Sexy Summer Ahead – Hilary Plots With Billy – Victoria And Travis Heat Up – Devon Attacks Jack