Fear The Walking Dead Season 2 Spoilers: Will Nick Continue To Go Crazy And Walk With The Dead, Or Return To His Family? 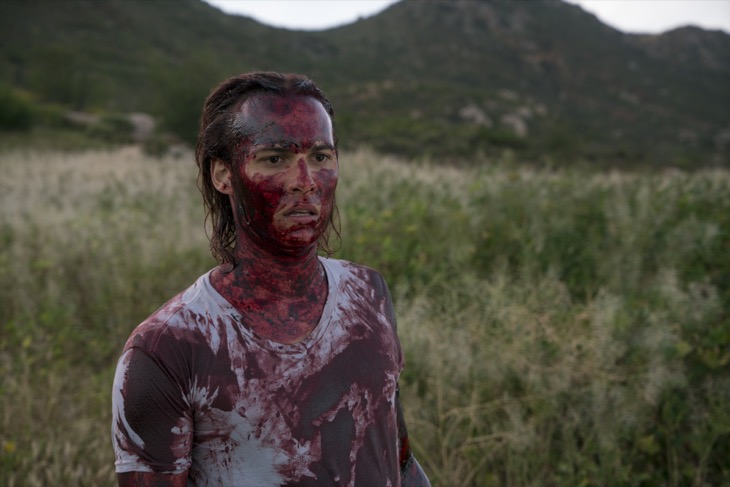 ‘Fear The Walking Dead’ Season 2 midseason break ended in a chaotic free for all. The characters had divided, Chris Manawa (Lorenzo James Henrie) left the group because he felt he was a danger to everyone. His dad, Travis Manawa (Cliff Curtis) went searching for him. Madison (Kim Dickens), Alicia (Alycia Debnam Carey), Ofelia (Mercedes Masohn) and Victor (Colman Domingo) fled the burning plantation of walkers in a pickup truck. Daniel (Ruben Blades) was last seen standing in the center of flames, surrounded by burning walkers. What about Nick (Frank Dillane)?

Nick Clark refused to leave with Madison, as she pleaded and begged him to go with them as only a mother can. How long will he be able to survive in the middle of a zombie apocalypse by himself, and why does Nick feel safer walking among the undead, than living with other survivors? Or, is it possible, he just doesn’t want to be with his family. There is a lot of tension between Nick and Madison, she shadowed over him too much in an effort to protect him. Madison always acted like Nick could not take care of himself, with all his history of drug abuse, and she herself having to wean him off the drugs. She sees him as weak, where others see him as strong and a survivor. Victor Strand saw this quality in Nick, that is how this family came to be with Strand on the boat to safety. Celia Flores (Marlene Forte) see’s a sadness in Nick, opening doors for conversations about the undead. Nick comes to believe that the walkers are still living souls, and this is just another stage of life, on ‘Fear The Walking Dead’.

While Nick is walking alone with the horde of burning walkers surrounding him, we see him fading into the group, almost as if, his soul is no different than theirs. Maybe this is how Nick sees himself. Just one lost soul among so many of the undead souls milling about. Or is it possible that once Nick has had some time to think about all that is surrounding him, he will try to return to his family, either for his own protection or to help protect his mother and sister?

Will Nick return to his family on ‘Fear The Walking Dead’? Will Nick and his mother reunite? Or will he remain wandering aimlessly among the horde of undead? Let us know what you think in the comments below!

‘Days Of Our Lives’ News: ‘DOOL’ Ratings Continue To Plummet – Some Fans Unimpressed With Current Storylines, What Needs To Change?