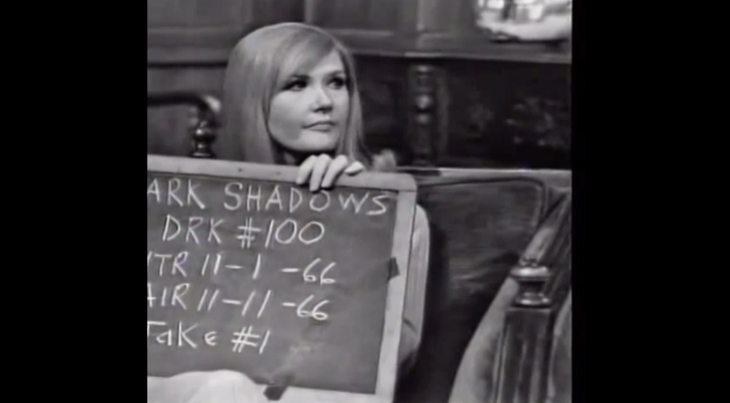 Written by Ron Sproat and directed by Lela Smith, the 100th episode, taped on November 1, 1966, begins with a shot of the exterior of Collinwood Manor and Victoria Winters [Alexandra Isles] narration. “My name is Victoria Winters. Long weeks ago a sudden death occurred near Collinwood, a death I now suspect was murder.”

Though Victoria thought she knew the identity of the murderer, but she found new evidence that pointed to a member of the Collins family as the killer. The victim was Bill Malloy [Frank Schofield], manager of the Collins Fishing Fleet and Cannery.

Victoria and Carolyn Stoddard [Nancy Barrett] are discussing an expensive pen, a gift from Burke Devlin [Ryan Mitchell] to Carolyn. The pen went missing the night Bill Malloy was murdered and hasn’t been seen since.

Suspecting that the missing pen may lead to the member of the Collins family who murdered Bill, Victoria questions Carolyn about its loss. Burke wouldn’t have given Carolyn such a rare and valuable gift if he didn’t care for her, would he?

Carolyn is supposed to meet Burke, an ex-con who grew up very poor in a shack that sat in the shadow of Collinwood Manor. Unbeknownst to Carolyn, Burke has returned to exact revenge on Carolyn’s uncle Roger Collins [Louis Edmonds].

Victoria questions Carolyn, “When are you seeing Burke?” to which Carolyn replies, “At the Blue Whale at 7 o’clock.’ Victoria needs to see Burke before Carolyn does and asks to use Carolyn’s car for a few hours.

Arriving in town, Victoria heads for the Collinsport Inn, room 24 where Burke is staying. Victoria reveals to Burke that she believes she has discovered something very disturbing. “I found out something, something that terrifies me!” Vicky cries to Burke.

Immediately Burke wants to know what it is that has Victoria so frightened. Victoria reveals to Burke that she believes Roger Collins murdered Bill Malloy

Burke Devlin wants to know why Victoria would think such a thing. Victoria explains she found the pen and when she spoke with Carolyn and discovered that Roger had lost the silver filigree pen. The pen may be the one thing that places Roger Collins at the scene of Bill’s murder.

‘Dark Shadows’ fans who do not own the complete series on DVD can watch ‘DS’ 100th episode on YouTube. Unfortunately, ‘Dark Shadows’ 100th episode is not yet available on Hulu. The streaming service purchased 400 episodes of the gothic daytime drama beginning with season 1, episode 210. There is no information yet regarding when the rest of the 1,225 episodes of the soap opera will be available.