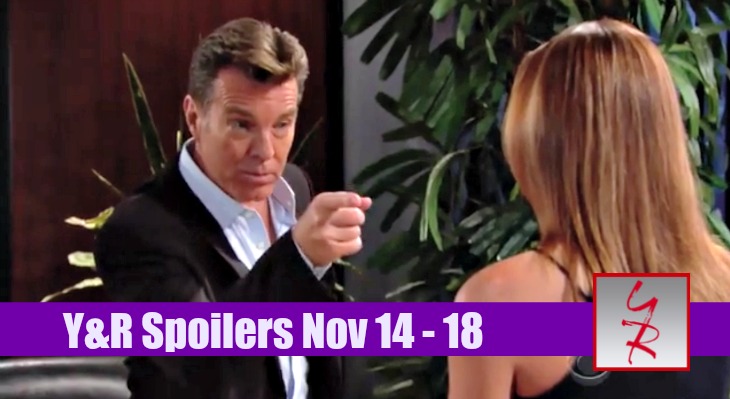 ‘The Young and the Restless’ spoilers for the week of November 14-18 tease that despite adulterous affairs some couples are meant to be together. Jack Abbott [Peter Bergman] will try to fight his attraction to ex-wife Phyllis Abbott [Gina Tognoni]. Will Jack be able to stay away from Phyllis or will ‘Y&R’ fans see a Jack and Phyllis reunion?

Phyllis will confront Jack and demand that the Jabot executive admit that he cannot resist her. Jack has had enough; Phyllis has betrayed him for the last time. “You have been playing me and it’s over,” Jack will angrily shout at Phyllis during their confrontation.

Related: Sharon Arrested After Interview, Hilary Catches On Camera – Travis Gets Stuck in a Jam

Jack and Phyllis can argue all they want but the fight will end in a kiss. That doesn’t mean Jack will take Phyllis back. How can Jack ever forgive Phyllis for cheating with his brother Billy Abbott [Jason Thompson]? Isn’t that the worst betrayal of all?

Another duo who won’t be able to keep their feelings in check are Travis Crawford [Michael Roark] and his ex Michelle Hazelton [Kelly Frye] will give into temptation. Travis knows Michelle is going through a divorce and wants him back.

Even though Travis is in a committed relationship with Victoria Newman [Amelia Heinle], he will visit Michelle in her hotel suite where she’ll answer the door wearing only a towel. Travis will come into Michelle’s room and she’ll drop the towel. ‘The Young and the Restless’ spoilers for the week of November 14-18 reveal that a passionate kiss will lead to Travis cheating on Victoria.

Ashley Abbott [Eileen Davidson] finds out Travis was unfaithful to Victoria. “You’ve got to tell her everything, or I will,” Ashley threatens. But Ashley can’t keep the secret about Travis’s cheating to herself and she will tell Billy.

Related: Puzzle Fun: Victor And His Grandchildren – Take The Challenge!

‘Y&R’ spoilers for the week of November 14-18 promise, “All isn’t fair in love and war. And a dirty deed, will he come clean?” Tune in to find out if Travis will tell Victoria the truth or if Billy and Ashley will be forced to go to Victoria with what they know.

Next on #YR… All isn’t faIr in love and war.

‘The Young and the Restless’ Spoilers Tuesday, November 15: Sharon Arrested After Interview, Hilary Catches On Camera – Travis Gets Stuck in a Jam