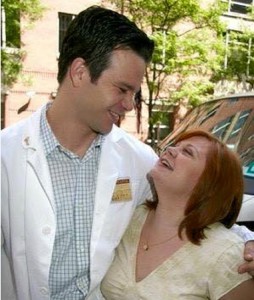 Kathy starred opposite Nathaniel on “One Live To Live” from 2002 until 2009 with a brief return to Llanview in 2011. Brier spoke of the time with Marston off-set and on-set in the eulogy that brought everyone to tears. The service in took place in Kauai on December 12 – exactly one month after Nathaniel’s passing due to complications from a motorcycle accident.

Kathy began the Facebook post by saying that she was still in shock. In the eulogy Brier told “OLTL” fans that Marcie was only supposed to appear for three episodes. But, TPTB immediately recognized that the actors had an instant connection. “I felt as though I had always known him, somehow, a recollection of our souls. We pretty much spoke in short hand from the beginning and most times no words needed to be spoken. We would just look at each other and know.”

The actress was soon put on contract with the ABC daytime drama and, as Kathy Brier remembers, “Before we knew it we were in the middle of one of the greatest love stories ever written for a soap opera. “The real secret to the magic of our story was that as Marcie & Al were falling in love so were Nathaniel and I. The love and respect between us naturally carried over onto the screen.”

There was so much to say about the life of Nathaniel Marston, but there was one particular thing that stood out, highlighting the deep pain Kathy felt when Marston left this world. “Nathaniel was my best friend, my partner in crime, my rock, my soulmate, my playmate, my cheerleader, my confidant, and one of the greatest loves of my life.”

We offer our sincerest condolences to both Nathaniel Marston’s mother Elizabeth Jackson and his beloved co-star Kathy Brier. “OLTL” fans can read Kathy’s entire eulogy below. We have left Kathy’s post exactly as she shared it on Facebook – no corrections were made to spelling or grammar. We felt it was important for fans to read the exact content of the beautiful tribute.

“It’s one month today since Nathaniel left us. I’m still in shock. His mom Elizabeth Jackson asked me to post my eulogy from his sea burial in Kauai because she thought you would like to read it.  From the first moment Nathaniel and I caught each others eyes on set there was an instant connection. I felt as though I had always known him somehow, a recollection of our souls. We pretty much spoke in short hand from the very beginning and most times no words needed to be spoken. We would just look at each other and know.”

I was only supposed to be on OLTL for three episodes but the chemistry between Nathaniel and I was undeniable. The powers that be @ OLTL quickly took notice and I was soon put on contract shortly after. Before we knew it we were in the middle of one of the greatest love stories ever written for a soap opera. The real secret to the magic of our story was that as Marcie & Al were falling in love so were Nathaniel and I. The love and respect between us naturally carried over onto the screen.

There are so many things I could tell you @ Nathaniel but as always I’ll focus on the things I love because after all love is all there is, right? If I had to pick the thing that I love the best @ Nathaniel it is his laugh. To be honest I don’t know who has a better laugh Nathaniel or myself, both are unapologetic and joyful! When we would laugh together we must have sounded like two obnoxious hiyenas to other people but that wouldn’t stop us, nor would we care what others thought. The simple sound of his laugh would make my heart skip a beat. When I managed to make him unabashedly laugh, the top of his face would scrunch up near his nose and eyes, and his mouth would open so wide I’d swear I could see his heart from the bottom of his throat. He also had the most amazing smile and not just because of his dreamy dimples. When I made him smile from his heart he would get this twinkle in his eyes as he looked down at me. What a gift it is to have been entrusted with his heart.

While we could talk, laugh and even sometimes cry about everything and anything my most cherished moments with him were spent in the safety & silence of each other’s company. As actors we often have to “be on” but by each other’s side all that pressure melted away and all we HAD to do was simply BE.

Elizabeth recently told me that she thought she had never seen Nathaniel at peace. I’m not sure this is true but all you need to do to see Nathaniel at peace is watch us on film. The most at peace Nathaniel ever was with me, was at my side working on set. He was a genius on a laser beam. He was strong, fragile, sharp witted, intelligent, funny as hell, sexy as hell, vulnerable, a lost soul, a gentle giant and breathtakingly beautiful but not because of his looks. He could take my breath away with his capacity and understanding of the human struggle and his generosity of spirit. He wore his heart on his sleeve. He had one of, if not the biggest heart I’ve ever known. He would do anything for anyone. We cherished the gifts we were given and that we got to share them with each other and the world and we never took it for granted.

I’ve heard it said its the little things that you take with you and I think whoever said it is right. I will take with me and hold steadfast to so many seemingly “small” moments. One of the sweetest seemingly small things Nathaniel ever did was come watch me as I would sign autographs and take pictures @ the stage door @ night after performing in Hairspray on Broadway. I didn’t know he did this for a long time until he told me one day. I asked why he didn’t just come up to my dressing room. He shrugged his shoulders and with a humongous smile simply said no, I love watching you do your thing. It makes me happy to just see you and I know your safe at the end of the night.
Nathaniel was my best friend, my partner in crime, my rock, my soulmate, my playmate, my cheerleader, my confidant, and one of the greatest loves of my life.

There are no sufficient words to express the pain of his loss that I know is felt by so many. Though I wish he were still here, I will walk with him in my heart and honor that our relationship was not for nothing, everyday for the rest of my days. I will be happy just to glimpse the sound of his voice and laughter as it now echoes in nature, to feel the brightness of his smile with that twinkle in his eye when he looked at me that still warms my heart and skin, and to know that I was truly, unconditionally and whole heartedly loved by an amazing man…not many people can say that and I don’t know a better gift. I take comfort in knowing that he is finally at peace and safe at the end of an EPIC journey and I will be forever grateful that I got to go along for the ride.”