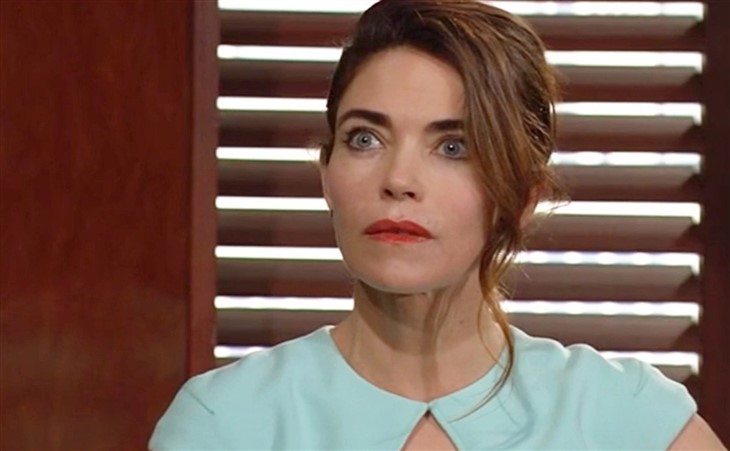 The Young and the Restless spoilers document that Victoria Newman (Amelia Heinle) wants employees who are loyal to her. Whether they are seasoned professionals is secondary.

However, Victoria did not afford Sally Spectra (Courtney Hope) the same courtesy. Heinle’s character also did not have time to fire her, allowing Nick Newman (Joshua Morrow) to do so because he is involved with the now-former Newman Media Chief Executive Officer.

Yet, Adam Newman (Mark Grossman) only hired Sally because she was his girlfriend when he was co-heading this stand-alone company that their father later allowed Victoria to fold into the family business.

Y&R spoilers say Victoria helps Nate Hastings (Sean Dominic) settle into a position she specifically wanted him to fill. Nate continues to question the hire, knowing that Devon Hamilton (Bryton James) was not wrong when citing the lack of experience issue at Chancellor-Winters.

Victoria, like her father, values a loyal employee. Victor Newman (Eric Braeden) held the same outlook. However, Nate’s uncle, Neil Winters (Kristoff St. John), had the educational credentials and earned his way up the corporate ladder at Newman Enterprises before eventually leaving.

Victoria’s offer gave Nate a chance for a fresh start. Putting his problems behind him and focusing on leading Newman Media is promising.

Victoria was intrigued by the inside information Nate voluntarily provided in the recent past. Nate went to a power player, hoping to leverage her clout.

Nate derailed that opportunity due to Elena’s moral persuasion. But he did not reveal Victoria as his backer. That proved wise, with the Newman Media job being the prize Devon recognized.

It also appears possible that Victoria might be personally fond of Nate, with a romantic storyline developing.

Victor trusts Tucker McCall (Trevor St. John) as far as he can throw him in Chancellor Park. While the pugilist is still in good shape, he might not be able to lift St. John’s character off his feet due to the rare blood condition’s impact on his strength.

Tucker has bobbed and weaved whenever anyone tried to pin him against the ropes, refusing to reveal his plans to take over CW and Jabot. If he can take down both companies, McCall Unlimited’s influence would be enormous and potentially rival Newman Enterprises on Y&R.