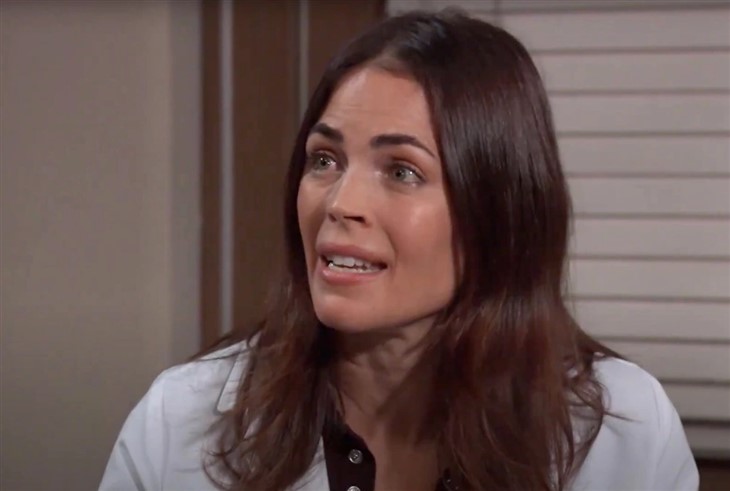 General Hospital spoilers reveal that Britt Westbourne’s (Kelly Thiebaud) health will continue to deteriorate as her Huntington’s Disease progresses. Will Britt decide that she wants to commit suicide and ask Austin Holt (Roger Howarth) to assist her?

General Hospital spoilers reveal Britt has known about her Huntington’s disease since she was on the run with Jason Morgan (ex-Steve Burton). However, Britt’s disease has progressed and she is terrified of the fate that she is sure will become hers. Dr. Talone (Sharon Omi) has recently informed Britt that she is in the late stages of her disease and also warned her of what is to come.

Huntington’s patients often have suicidal thoughts when faced with their reality. Britt is more scared of being incapacitated than she is of dying from this disease. Britt has been leaning on Austin for a while not even having him set in on her appointment. Could Britt ask Austin to help her commit suicide so she can escape this horrible fate?

Austin has promised to be there for Britt for as long as she needs him. However, Austin didn’t necessarily sign up for this. Assisted suicide could cost Austin his job after all. However, next week, Britt opens up to Austin and tells him what she is planning. So Britt could tell Austin she is planning to commit suicide instead of leaving things to fate.

Austin is doing a lot of off-the-books work for his “boss” and Britt may find out about this and force him to help her to keep quiet. After all, Austin knows all about debilitating diseases, will he be sympathetic enough to help Britt out of the goodness of his heart? Will Britt have to force Austin’s hand a bit to get him to go along with her plan?

General Hospital Spoilers  – Britt Westbourne Is On The Way Out

Fans know that Britt is on her way out one way or the other. Britt isn’t likely to check herself into a facility and Liesl Obrecht (Kathleen Gati) would hunt her down. However, Britt may be able to pull off this suicide with Austin’s help. Perhaps Britt will ask Austin to show her Pautuk and plan to go through with her plans there.

Britt doesn’t necessarily need Austin’s help, she is the co-Chief of Staff. Britt can get her hands on any kind of medication she wants to cause an overdose. However, it isn’t likely that Britt would want to die alone. Austin may be the only person Britt feels like she can trust to help her. Will Britt enlist Austin to help with assisted suicide? Will Britt leave town in some other way?