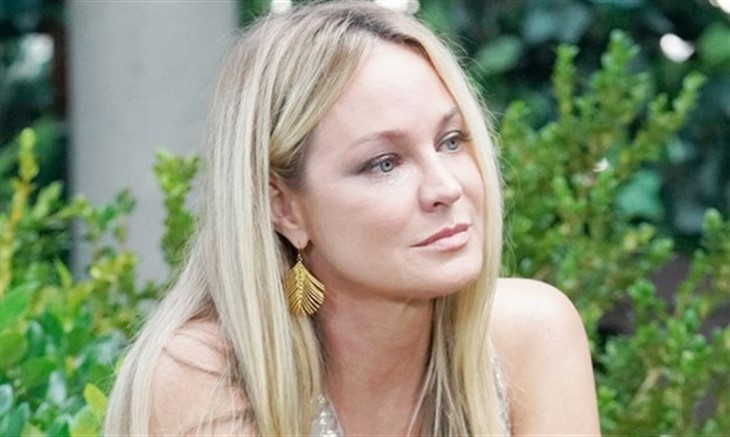 The Young and The Restless spoilers and updates tease that Sharon Rosales (Sharon Case) could move on with Tucker McCall (Trevor St. John) in a hot new romance. At first it looked like Sharon and Nick Newman (Joshua Morrow) might reconcile, but he wound up involved with Sally Spectra (Courtney Hope) so that won’t happen.

The Young And The Restless Spoilers – More Than Coffee And Sympathy

Viewers know that there’s a lot more to Sharon than coffee and sympathy, although she does keep busy with both of those jobs. Sharon owns, runs, and frequently works at Crimson Lights coffeehouse as well as works as a therapist, although the therapy job isn’t every day. No doubt, the sudden death of her husband Rey Rosales (Jordi Vilasuso) hit her hard, as it did nearly everyone in Genoa City.

She has had plenty of support and love from Nick, from her family members and Rey’s partner Chance Chancellor (Conner Floyd) who honored him by closing all his open cases. Sharon will be heavily involved in Mariah Copeland (Camryn Grimes) and Tessa Porter’s (Cait Fairbanks) adoption storyline, but she deserves some romance as well.

Y & R Spoilers – Involved In The Past

Tucker and Sharon were involved one time in the past as well, so this too would be a reconciliation with a lost love storyline. The timing wasn’t right the last time, with Sharon having some mental health issues and Tucker involved in some schemes. It may get complicated this time around as well, with Tucker seeming to be involved in some schemes with Diane Jenkins (Susan Walters).

Y&R spoilers say Diane definitely isn’t happy with Tucker’s showing up in her hotel room out of nowhere but Sharon might be a little happier to see him. Sharon will definitely be surprised to see Tucker back, the last time anyone heard he was off the grid somewhere when Katherine Chancellor’s (Jeanne Cooper) will was challenged.

The Young And The Restless Spoilers – Able And Available

Sharon has nothing keeping her to be able and available for her to rekindle a relationship right now, and Tucker might just find some old flames rekindling as well. His return will be a shock for many in Genoa City but a welcome relief to more than a few, with Devon Hamilton (Bryton James) welcoming him to the family fold. Longtime viewers will remember Tucker is Devon’s birth father, and there could be some mix with Jill Abbott (Jess Walton) as well.

Tucker and Jill were deeply involved until someone interfered with false information that they were brother and sister. Of course, they are not, but with Sharon at least he won’t have those kinds of problems.