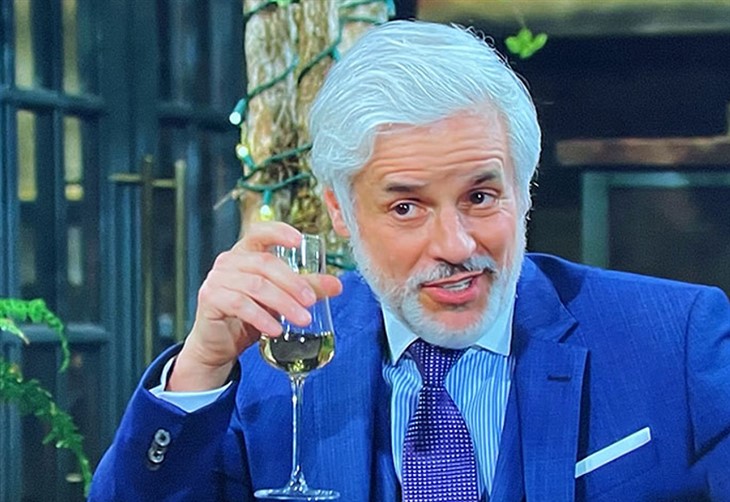 Viewers of The Young and The Restless will remember that Michael had been considering stepping down from the District Attorney’s office position he’s been in for a few years now, and deciding whether total retirement was for him. Among other family and friends who had come to the table where he sat considering his options with his wife Lauren Fenmore Baldwin (Tracey E. Bregman) was Victor, who made no bones about his thinking Michael would be crazy to totally retire. Victor had offered Michael to come on board at his and his son Adam Newman’s (Mark Grossman) company, Newman Media as their attorney, citing himself as a good example of retiring without totally retiring. Viewers of The Young and The Restless will remember that Michael told Victor he’d give it some serious consideration, agreeing with him that he’d go crazy with boredom if he totally went into retirement.

Viewers of The Young and The Restless can imagine that Michael would want to know what his new position as Newman Media attorney would entail, before he fully signs on and accepts Victor’s offer. To Michael’s astonishment, Victor confides in him that he is not so sure about if he can trust his son-in-law Ashland Locke (Richard Burgi) now that he seems to be in full recovery! Viewers of The Young and The Restless will remember that Locke was diagnosed with a late stage of cancer, and had gone to South America in search of an experimental cure. Victor tells Michael that as far as Ashland Locke was concerned, son-in-law or no, he’s been in a wait and see mode and he tells him he’s discreetly launched an investigation further into his background. Victor tells Michael that he has always trusted him and he knows he won’t be afraid to do whatever it takes to get the job done, whatever the job is!

Viewers of The Young and The Restless will see Michael agrees to take the job – and Victor’s first order of business is the investigation into Ashland Locke, and in particular, his health! Michael, and viewers of The Young and The Restless will soon see that the investigation into Ashland’s health will lead to more questions than answers, especially since checking into that experimental treatment facility shouldn’t cause HIPAA concerns. Ashland’s experimental treatment was outside of the United States, and HIPAA doesn’t apply outside of the 52 United States and United States territories; and that would be the most logical place to start. Anywhere Michael would not need any subpoenas or warrants would be ideal, although as an attorney his own legal licenses would not apply as well; in this instance, Michael is acting more as a private investigator than an attorney! Michael may find out some things about Ashland that aren’t as he says they are even in regards of his health, and it will affect many Genoa City residents!