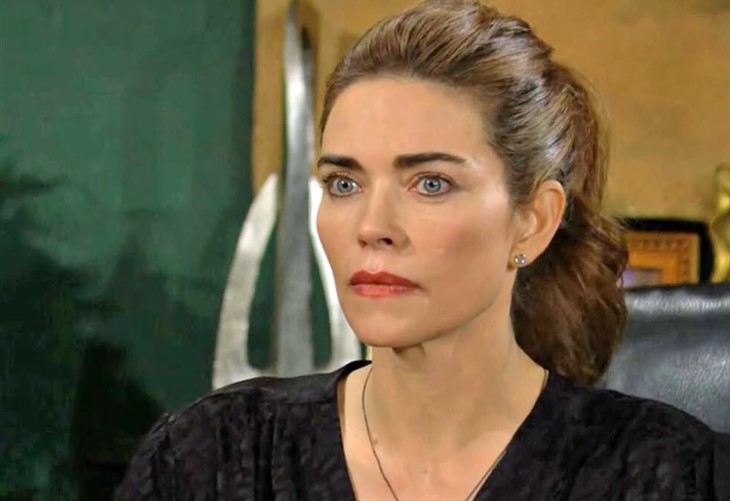 The Young and the Restless (Y&R) spoilers for Monday, January 17, 2022, reveal Victoria going after Adam just because she can.

The Young And The Restless Spoilers – Victoria Newman Is Ruthless

Victoria Newman (Amelia Heinle) definitely learned from the best and The Great Victor Newman (Eric Braeden) doesn’t know whether to be scared or proud. While he likes a cutthroat Victoria, she seems to want everything and to hurt people just because she is capable of hurting people and now she wants to hurt Adam Newman (Mark Grossman) for no good reason at all.

Adam wasn’t even the brother who tried to ruin her wedding. That was Nick Newman and she is certainly not seeking revenge on him. Victoria doesn’t even have Billy Boy Abbott (Jason Thompson) to back her up anymore so she is going it alone in her quest to acquire Newman Media for herself and Ashland Locke — as a play toy perhaps?

What does Victoria have to really gain except another business conquest when Newman Media has meant so much to Adam of late. Well, when Adam gets wind of her plans, it looks like it’s going to be a battle to the finish between these two siblings.

Victor is a busy man on Monday. He has his issues with Victoria and Adam brewing but he also has a legal challenge for Michael Baldwin (Christian Le Blanc) and makes him an offer he just can’t refuse. Michael really was planning to retire and enjoy these later years, but Victor manages to pull him right back in. Is his offer really that good?

It seems that Abby Newman (Melissa Ordway) may be the only person who wants to raise Dominic in the way she had dreamed when Chance Chancellor (Connor Floyd) couldn’t even be found. Chance admits to Devon Hamilton (Bryton James) that he is not so sure he can be the father that Dominic needs and isn’t even sure if he wants to be.

Devon will certainly use this in his quest for shared custody and Abby is about to be stunned when all her dreams start crumbling again. Stay tuned to The Young and the Restless weekdays to see how these stories play out.

Days Of Our Lives Spoilers: EJ’s Trial Spins Out Of Control