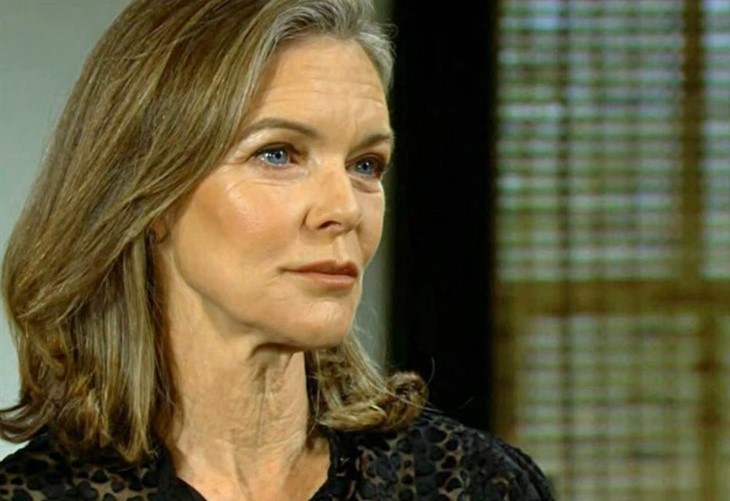 The Young and the Restless (Y&R) spoilers reveal that Diane Jenkins (Susan Walters) gets Kyle Abbott’s (Michael Mealor) contact information. Diane will reach out and try to build a relationship with her son. However, Kyle might not agree and could want nothing to do with her. Despite Allie Nguyen (Kelsey Wang) being furious about Diane’s deception, the two will form a bond.

The Young And The Restless Spoilers – Jack Abbott Gives In

Y&R spoilers reveal that Diane wants Jack to help smooth the way for her to have a relationship with Kyle. At first, Jack is completely against the idea. However, Jack does end up giving in. It’s not Diane that convinces Jack of this, though. Interestingly enough, it is Phyllis Summers (Michelle Stafford).

According to Bergman and Stafford’s interview with Soap Opera Digest, Phyllis tells Jack that Kyle is an adult. Even though she knows Jack wants to protect his son, Kyle must make his own decision. So, Jack agrees to give Diane contact information for Kyle. However, that is as far as he will go.

When Kyle lost his mom at an early age, it was difficult for him. Jack recalls how torn up Kyle was about Diane’s death. So, when Kyle learns that his mother never died and has been alive all these years, there could be a lot of conflicting emotions.

Kyle will be angry that his mother abandoned him and let him go through all that grief. At the same time, Kyle might want answers or might even crave a chance to get to know his mother again. Kyle could go either way, but there are hints that he could decide to stay away from Diane.

The Young And The Restless Spoilers – Connecting With Allie Nguyen

The Young and the Restless spoilers reveal that Allie was furious to find out that Diane used her. Allie didn’t like being a pawn in Diane’s deception to get to Jack and Kyle. However, Allie changed her mind about Jack after listening to his story.

Diane might get some sympathy from Allie in upcoming episodes. In fact, Bergman hinted to SOD that Diane and Allie could end up forming a bond.

Allie has given strong hints to Jack that she doesn’t have a good relationship with her mother. In fact, her mother came for Keemo Abbott’s (formerly Philip Moon) funeral. Afterward, she didn’t stay to help Allie deal with the grief. Allie’s mother didn’t even assist her with settling the estate, selling the house, or dealing with the lawyers and bank.

Allie said it was because her mother had to get back to work. Surely, her mother could have stayed for a few days. So, she chose to leave everything on Allie’s shoulders, indicating the two might be estranged.

If Kyle rejects Diane, she could latch onto Allie. Meanwhile, Allie could be looking for a maternal support system. However, would this be a toxic bond that has Diane being a bad influence on Allie? Or could the writers have Allie be a good influence on Diane? That remains to be seen.