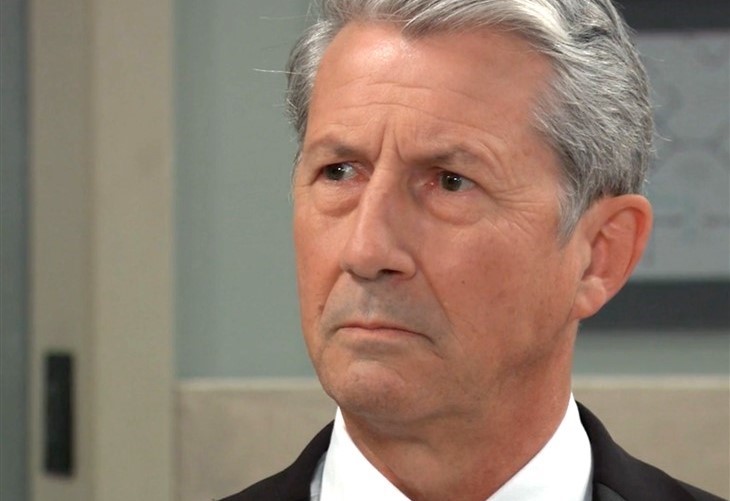 General Hospital (GH) spoilers and updates tease that Victor Cassadine (Charles Shaughnessy) will try to convince a skeptical Laura Collins (Genie Francis) that they have the same goal on an upcoming episode of General Hospital!

General Hospital viewers know that Laura doesn’t trust Victor as far as she could throw him, and yet he is trying to get her to understand that they have the same goal – to protect their families! General Hospital viewers know that Laura is all about protecting her family – from Victor, but Victor wants to protect their common family as much as she does; this is difficult for Laura to swallow, with all her bad Cassadine experience from the past. Victor and Laura’s common family means Nikolas and Spencer Cassadine (Marcus Coloma, Nicholas Chavez); and the enemy who Victor is trying to band the Cassadines together against is Laura’s enemy just as much as it is theirs! But Laura feels like Victor is just putting up a smokescreen; after all, she has information gained by Anna Devane (Finola Hughes) and Felicia Scorpio (Kristina Wagner) that Victor is complicit in the murder of Luke Spencer (Anthony Geary).

General Hospital viewers will recall that Victor’s henchman, Johann Bauer (Max Decker) was seen in the vicinity of the fatal cable car accident, and Felicia and Anna reported back to Laura that an accomplice in the transportation office committed suicide in front of them! How connected this man, who mentioned dying for a worthy cause was to Victor himself was unknown, but Laura, Felicia and Anna were all sure that he was connected to Bauer. So, as General Hospital viewers can imagine, Laura is not going to believe anything that Victor says about their joining forces against some common enemy and that she and he have any kind of common goal! Still, Victor tries to convince Laura that he only wants to protect the family just like she does – and especially those family members in common – including Esme Prince (Avery Kristen Pohl) who may be carrying Spencer’s child! This was news to Laura, who hadn’t spoken to any of them since Esme moved out of her home!

General Hospital Spoilers – Laura Collins Asks Victor Cassadine Flat Out Who, Or What, Is The Common Enemy He Speaks Of

General Hospital viewers will not be surprised that Laura will ask Victor flat out who, or what, is the common enemy he speaks of; and as expected, Victor will be evasive, only to say that Cassadine technology has fallen into the wrong hands! Victor tells Laura that the technology needs to be retrieved and returned to the Cassadines, because in the wrong hands, it could destroy them all, and as General Hospital viewers would expect, she asks him if he means the Ice Princess! Fake ice princess diamonds have been sent twice – apparently, the one Tracy Quartermaine (Jane Elliot) had was fake, and around twelve or so years ago Lulu Spencer (Emme Rylan) had received one. Victor remains evasive but insists to Laura that banding together as a family – his and hers – is crucial, but Laura’s not buying what he’s selling!