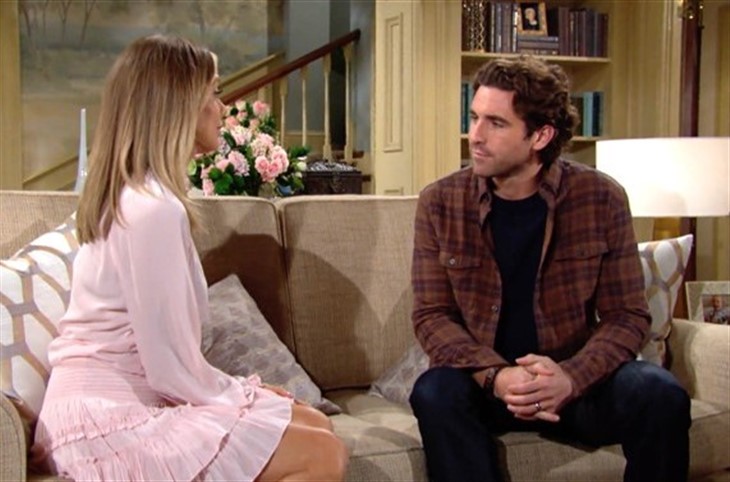 The Young and the Restless (Y&R) spoilers document that Chance Chancellor (Conner Floyd) had his return to work request granted. So, he will return to his preferred vocation. But is that best?

Abby Newman Abbott Chancellor (Melissa Ordway) was concerned about her husband. But she has begun feeling better, especially because his doctor recommended getting back to work, and Paul Williams (Doug Davidson) approved it.

As an aside, Davidson is wanted and needed on the show. His headshot is still part of the main cast list. Hopefully, TPTB make it happen. The recent past does not provide current encouragement for that happening.

Thankfully, Abby’s mother has returned to Genoa City, Wisconsin. Abby and Chance can use her support and guidance. But Ashley Abbott (Eileen Davidson) is pumping the brakes on a different daytime issue.

Ashley’s instincts have often been right. But she would admit that her analysis of everyone has not always been perfect.

Unless Allie Nguyen (Kelsey Wang) is pulling an unexpected scam, she is Jack Abbott’s (Peter Bergman) granddaughter. Keemo Volien Abbott Nguyen’s (Philip Moon) handwritten letters, unless proven to be forgeries, help to prove that Allie is his daughter and Jack’s blood.

Abby is the true hero of her new family. She held everything together when Chance accepted what proved to be a disastrous mission to Spain.

As viewers know, Ordway’s character was written into an extended malaise. One bizarre event was followed by others and included the strange return and devolvement of one-time good guy, Ben Stitch Rayburn (Sean Carrigan). That part of the plot and some others were very fuzzy.

Abby can benefit from her mother’s advice and input, with life hopefully stabilizing in the short term.

Jack will need reinforcements now that Diane has announced her return from the grave. An explanation of how that happened and why she kept her existence secret for many years opens the drama this legendary trouble-maker has re-ignited.

Ashley is a force to be reckoned with who has fiercely defended her family. Her suspicions about Allie are likely to be fully transferred to Diane one-hundredfold.

Diane’s incredible return also telegraphs a reunion with her and Jack’s son, Kyle Abbott (Michael Mealor). He was very young when Diane was killed. So, that is another family matter that Ashley can help Jack navigate in the days ahead.

GH Spoilers: Molly And TJ Decide To Look Into Harmony’s Past