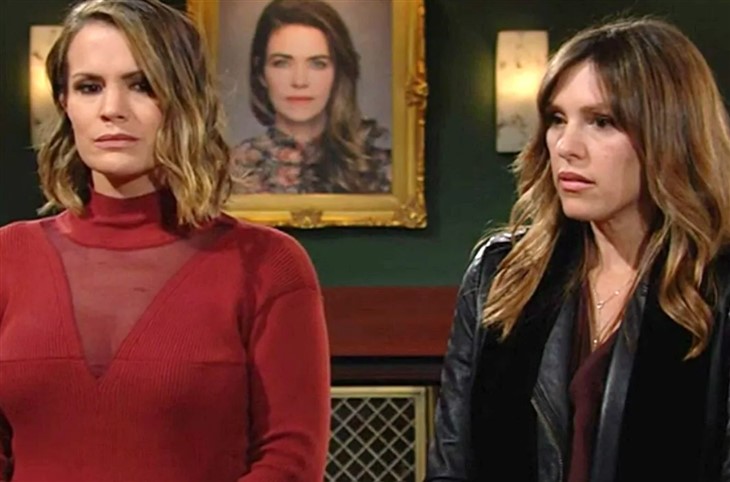 Chelsea is a creative soul. Chloe used to be far more open to new ideas than she is now. Possibly the responsibilities she and her husband, Kevin Fisher (Greg Rikaart), share are weighing on her?

Their children are younger than Connor Newman (Judah Mackey). But the current conflict appears to be more about stress than a personality clash.

Chelsea has endured a lot in the last year or so. Her discovery of Adam’s plan to physically destroy Newman Towers, with his family inside, caused Chelsea to expose and prevent what would have been a tragedy.

Adam was not in his right mind at that point in the plot, as evidenced by him retaliating against the woman he appeared to intend to remarry. He had Connor’s mother kidnapped. That included Chelsea being knocked unconsciousness by a blow to the back of her head.

The Young and the Restless spoilers tease Chelsea suffered a stroke shortly thereafter. She exacted revenge when attempting to frame Adam for Rey Rosales’ (Jordi Vilasuso) poisoning. The reveal of her as the poisoner and confinement in a mental health facility, along with an approved, escorted trip to help Anita Lawson (Catherine Bach) recovery from physical ailments, produced an unexpected friendship with Rey before his untimely death in a car accident.

Chloe had what felt like a downward talk with Chelsea at Society. She said that Chelsea’s recent mental issues were not her fault. But Hendrickson’s character glossed over Rey’s importance in Chelsea’s rebound.

Devoted viewers appreciated the irony of Chloe skipping past the link between Rey and Chelsea because that is what TPTB did. The effort to develop that personal connection, which projected toward a potential romantic pairing, was oddly halted.

So, Chloe’s inability to grasp what Chelsea has endured and recognize why she is excited to move forward with the Marchetti opportunity is tied. Chelsea is right to be disappointed in Chloe, and that was before Sally Spectra (Courtney Hope) reached out with the Newman Media job offer.

The Young And The Restless Spoilers – Life Changes In Genoa City, Wisconsin

Why have Chelsea and Chloe started going at each other? Because this is daytime and viewers watch drama.

Adam’s choice not to pursue a romantic reunion with Chelsea set her on a new path. That, alone, should be enough for Chloe, but it is not.

So, the audience appears to be witnessing what could be the start of a renewed rivalry. Chloe and Chelsea have been at intense odds before. Now, this summer, they are heading back in that daytime direction.