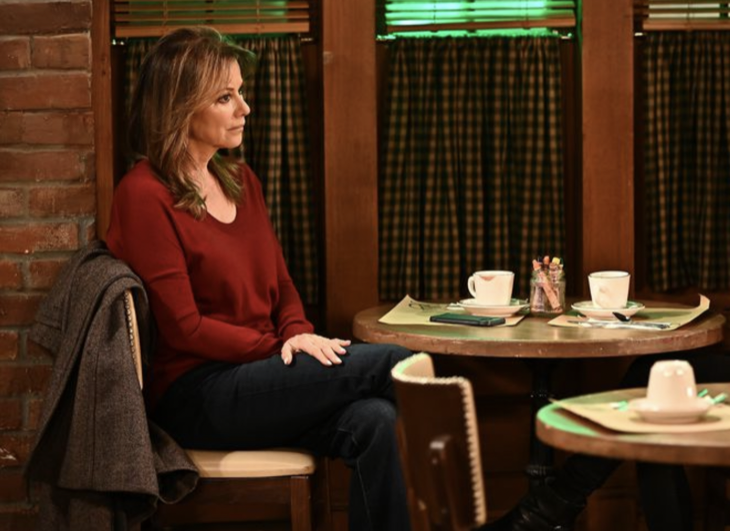 General Hospital spoilers for Thursday, July 7 tease unsure solutions for some and false starts for others on the next GH!

General Hospital Spoilers – What Am I Supposed To Do, Give Up?

At the Quartermaine mansion, Ned Quartermaine (Wally Kurth) thinks he knows what’s upsetting Brook Lynn Quartermaine (Amanda Setton) so much. Brook Lynn really hasn’t let her father in on the problems of late that she has had with Linc Brown (Dan Buran) and his ownership of her songs. Linc controls her songs and is using them for commercial jingles and there are unsure solutions: she asks Ned what is she supposed to do, give up?

Longtime viewers will remember that Ned is not exactly a stranger to the music industry and how it works; he too is a songwriter. He once a double life as Ned Ashton, Quartermaine heir and Eddie Maine, cutting edge rock star to the chagrin of his Quartermaine relatives!

GH Spoilers – You Haven’t Seen My Best Yet

At The Metro Court Pool, Gregory Chase (Gregory Harrison) and Alexis Davis (Nancy Lee Grahn) talk for the first time since their false start arguing about the purpose of journalism. She wants to know why Gregory hasn’t accepted her challenge to write something to see how readers would react; if they reacted well, he’d have more leeway on articles. Gregory smiles and appears flirtatious with Alexis as he tells her she hasn’t seen his best yet, implying he wants to show her! The question is now, does she want to see more, or has she had enough, and does that mean he accepts her challenge?

Laura outlined her plans for Victor to her brother, Martin Grey (Michael E. Knight) in a previous GH episode. She plans to have Victor deported under the grounds of moral turpitude because of his years-long criminal history.

GH Spoilers – Only You Can Answer That Question

At Shadybrook Sanitarium, Dr. Kevin Collins (Jon Lindstrom) will bring an unexpected visitor to Elizabeth Baldwin (Rebecca Herbst). Judging by her reaction in a previous General Hospital preview, she won’t like the visitor that he plans to bring in – she sweeps a jigsaw puzzle off the table towards Kevin! As Kevin gives her a heads-up to what he plans to do, she obviously has some questions for him about what is about to happen. Kevin tells Elizabeth that only she can answer that question!

In a park, Valentin meets with Victor, and the atmosphere is tense as again Victor wants Valentin to do something for him Valentin doesn’t like! Valentin’s answer will be to tell him he will cut his throat after he makes his request, which is that he expects him to spoil those plans! These plans are likely Laura’s plans to deport Victor, which his spy in Laura’s office, Deputy Mayor Eileen Ashby (Heather Mazur) probably told him about.

Victor will want Valentin to assassinate Laura and Valentin will later report that he failed to do so.  Valentin of course will fail to complete that mission on purpose!

GH Spoilers – That Is Not What’s Happening Here

Harrison Chase (Josh Swickard) will refute an assertion of Hamilton Finn’s (Michael Easton) at the Metro Court pool. Previous GH episodes revealed that Chase, Gregory and Finn were all talking by the pool with Chase about his suspension from the PCPD and about a civilian review board making decisions. Then Greg and Finn had excused themselves when they saw Brook Lynn coming towards Chase to talk. Greg headed towards Alexis and now Finn has returned after Brook Lynn left and Finn is probably talking about Chase and Brook Lynn’s obvious mutual attraction! Chase denies there’s anything between them and says that’s not what’s happening here!