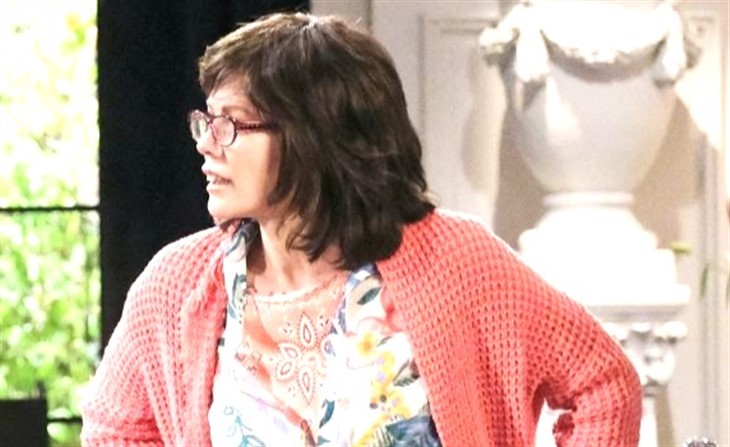 Days of Our Lives spoilers reveal Susan Banks continuing to pop in and out of Salem as she always does, but it might be time for her to stay put.

Days Of Our Lives Spoilers – Susan Banks Knows All

Even back in the 1990s when she was played by Eileen Davidson, Susan Banks couldn’t help to both amuse and entertain DOOL fans. After all, she believed she had been impregnated by Elvis Presley and named her son Elvis because of her love for the late rock star and also because she thought he really returned and just for her.

As longtime fans know, that was really Stefano DiMera (Joseph Mascolo) who was dressed up in a flamboyant Elvis costume who was there fooling Susan as he had her impregnated using his sperm. The result was EJ DiMera, the grown man that Susan still calls Elvis.

With Daniel Feurriegel now playing the part of EJ rather than James Scott, we can now see how close EJ and his mom really are and maybe have always been. However, the previous version of EJ seemed to be embarrassed by the mother who never did anything but love him. In fact, she was so devastated when he was thought to have died, that she put a presumed dead Will Horton in his place and convinced him that he was her Elvis.

Now, Susan is the one who can see all terror and problems in Salem, but she also racks up frequent flyer miles doing so.

We know Susan has a boyfriend out in Memphis named Roger who she is madly in love with, so every time she pops up in Salem to warn EJ or Dr. Marlena Evans (Deidre Hall) of something horrible that is about to go wrong, she then leaves again to be with her Roger. And none of that makes sense.

Let Susan move Roger to Salem so we don’t have to keep imagining her getting on planes several times a year to have visions that are meant to scare and save Salemites. She is a viable character, although an unusual one, and she needs a permanent place on DAYS, as does actress Stacy Haiduk, who has made Susan her own. (For that matter, let’s see Kristen DiMera some more.) Stay tuned to Days of Our Lives weekdays to see how Susan’s story plays out.