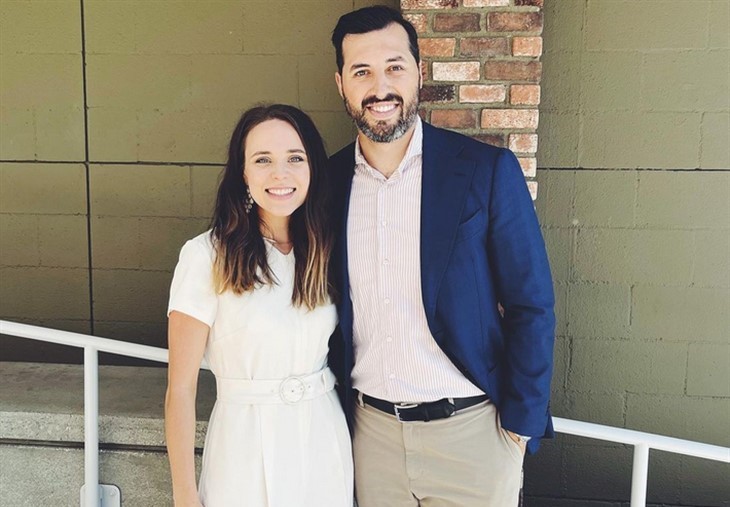 Now, however, rumors have soared that some Duggar family members might star in a new reality TV show. Find out what Jinger Duggar and Jeremy Vuolo revealed on Instagram. And discover how fans responded below.

Reality TV show spin-offs have provided a never-ending source of income for networks. And now rumors have soared that the Duggar family could star in a “Counting On” spin-off. However, only two members seem likely to take the lead: Jinger Duggar and her husband Jeremy Vuolo, per the Sun.

The reality TV show spin-off gossip began when Jinger shared an Instagram Story with a give-away clue. In the pic, Jinger and Jeremy smiled as they posed together. She wore a dark shirt, with her curly hair loose. But fans spied a microphone on that shirt.

Jeremy joined Jinger in a white shirt with a Los Angeles Dodgers baseball cap. However, it seemed that only Jinger wore the microphone. She pinned the device to her shirt collar, with the strap placed to record all her dialogue.

However, Jinger avoided responding to fan questions about the possibility of a reality TV show. But her husband Jeremy did react. And he hinted in an emoji that the duo launched a secret project that they could not yet reveal. Because of those clues, social media got the buzz going.

For instance, one fan wrote, “It’s realllllllly making me wonder if there’s a spin-off in the works at TLC (or elsewhere) with the Vuolos. That they’re not acknowledging the mic at all and that she was in at least two pictures out in LA with the mic on makes me think that this is definitely filming for something.”

But the key question remains: What network would take on a Duggar family show in the wake of Josh Duggar’s guilty verdicts for child pornography? Thus far, TLC had to cancel both “Counting On” and “19 Kids And Counting” because of Josh’s scandals. The backlash over Josh sparked a petition that made sponsors withdraw their advertising at the time.

An insider shared cancellation details. “The decision was made by TLC to cancel the show. The family was told over the phone shortly after. The petition from those who boycotted Counting On was hard to ignore, and sponsors were very concerned following Josh’s arrest,” explained the source.

“But the bottom line is, the network really wants to be on the right side of this scandal ahead of Josh’s trial. It was important for bosses to be seen to have taken action. The case has put the show in such a bad light, and although it’s a shame for those who worked hard on it, and the money spent, there really is no way forward [to continue Counting On],” summed up the insider.

Tell us what you think. Do you believe that a network might take a chance on a new Duggar family show in the wake of Josh Duggar’s scandals? And after you share your views, check back on our site for more reality TV news.