Days Of Our Lives Spoilers: EJ And Belle Think Nancy Will Be The Key To Clyde’s Downfall! 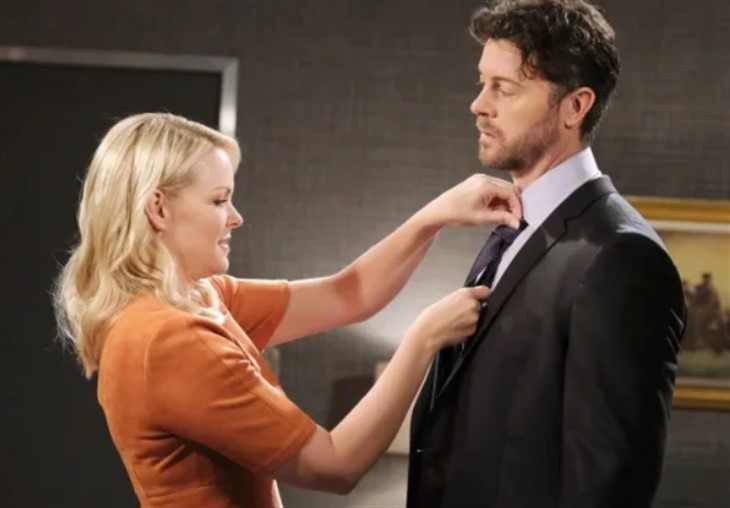 Days of Our Lives spoilers tease that EJ DiMera (Dan Feuerriegel) recently remember who murdered him several years ago. He was saved by Kristen DiMera (Stacey Haiduk) who used Dr. Wilhelm Rolf’s (William Utay) infamous serum. Like most of Rolf’s subjects, EJ suffered from amnesia after taking the serum and wasn’t reunited with his family for several years, which became even longer when much of his body was burned while he was with Kristen. Although EJ is finally back among his family, he still missed quite a bit of time. So, he was quite shocked once he realized that Clyde Weston (James Reed) gave the order that he be killed!

Days Of Our Lives Spoilers – EJ DiMera Can’t Publicly Out Clyde Weston Because Of The Nature Of Their Partnership!

While EJ would like nothing more than to reveal to authorities that Clyde was responsible, EJ can’t make a move against Clyde because they were partners in a drug-related deal that EJ would likely go to prison for himself. Clyde would certainly threaten to rat out EJ because he just finished serving a long prison stint and seems to be trying to live a better life. To that end, he has even taken a romantic interest in Nancy Miller (Patrika Darbo). So, although EJ can’t rat Clyde out himself, perhaps he can get Nancy to do it for him. Although Nancy is aware of Clyde’s past, that doesn’t mean she will tolerate any further criminal activity if they do become serious about their relationship.

Belle has promised that she won’t tell anyone that Clyde had EJ shot, but she knows that EJ is still going to find a way to get revenge. She had already urged EJ not to do anything violent although EJ didn’t make any promises. But they were both intrigued to see that Clyde and Nancy were seemingly a couple. Belle and Nancy go way back because Belle and Chloe Lane (Nadia Bjorlin), Nancy’s daughter, were good friends in high school. While Belle won’t want to do anything to cause harm to Nancy, she might suggest that she might be the key to Clyde’s downfall.

Days Of Our Lives Spoilers – Will Nancy Miller Be A Willing Accomplice Or Iust A Pawn?

It remained to be seen how Nancy would figure into Belle’s plan. Perhaps she will simply come clean to her about EJ’s murder and the fact that Clyde hasn’t been charged with it. That may not sit well with Nancy who could certainly tell Clyde that either he confesses or she will go to the authorities herself. But hopefully, that won’t be how it plays out. Perhaps Belle and EJ will leave clues for Nancy to find about Clyde’s current criminal endeavors. She won’t date a drug dealer no matter how nice he is to her. Nancy may just turn Clyde in and walk away herself. Honestly, it would be better for her to find out now than for something Clyde is involved in harming either Nancy or one of her kids!

How solid are Clyde and Nancy? Would she keep her mouth shut if she discovered he was involved in the drug business? Or will she find out he was behind EJ’s death? Anything can happen in Salem so stay tuned to Days of Our Lives airing weekdays on NBC. And don’t forget to check back right here regularly for all your Days of Our Lives news, information, and spoilers!