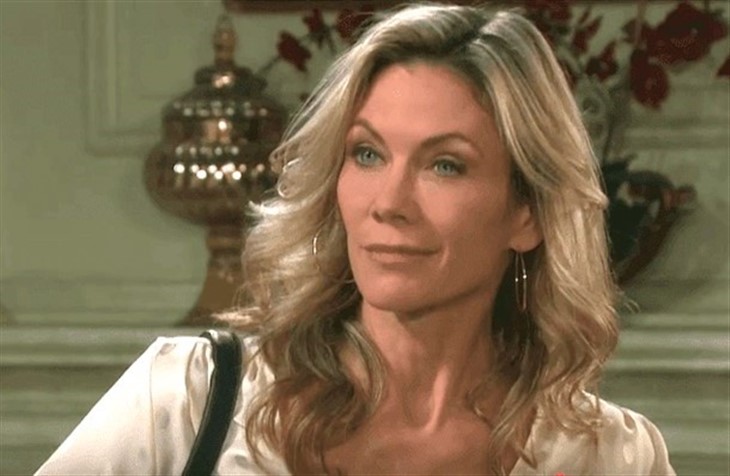 Days of Our Lives spoilers reveal that Kristen DiMera is back. However, both Stacy Haiduk and Eileen Davidson will be on-screen at the same time. This is confusing to viewers, but it all could be connected to something Marlena Evans (Deidre Hall) said during a recent episode. Could one of the Kristen’s be the devil?

DOOL spoilers reveal that both Kristen and Susan Banks (also played by Haiduk) are back. While Kristen has been arrested, Susan will warn Ben Weston (Robert Scott Wilson) and Ciara Brady Weston (Victoria Konefal) that their baby is in danger. Then, Susan talks to Marlena and knows something isn’t right. During the week of November 8, a sneak peek photo confirms that the devil attacks Susan.

Meanwhile, it is confirmed that two unexpected characters will help Kristen escape. It is also teased that during November sweeps, Kristen considers bolting with Rachel DiMera (Finley Rose Slater). Now, this will be Haiduk’s version of Kristen. So, what is the deal with Davidson also appearing as Kristen?

Days of Our Lives spoilers reveal that before John Black (Drake Hogestyn) was kidnapped, Marlena mentioned something important. Talking to herself, “MarDevil” said that nobody realizes that she can change appearance. So, it sounds like one of the people that the devil impersonates is Kristen. However, both Davidson and Haiduk are excellent at playing multiple roles. So, what is the point of bringing them both on at the same time?

If one Kristen is real and the other is the devil, viewers will need to be able to tell the difference. Now, bringing on two actors is one way to accomplish this. To the characters, they both will look like Kristen. However, it is to make sure that viewers can easily tell which is which.

There are other ways to accomplish this, such as when Kristen was wearing masks of practically everyone in Salem. Using different tones of voice, different facial expressions and even a different hairstyle can accomplish this. There are even editing techniques and using a double that has both Kristen’s appear in the same scene together.

Days Of Our Lives Spoilers – Eileen Davidson Is Soap Gold

However, Davidson returning is gold for DOOL. Fans have been hoping for Davidson to return one day, so this might help get viewers to tune in. Due to the buzz that is being created by Davidson finally agreeing to appear in a storyline after so many years, it will be interesting how viewers will respond to the storyline.

Plus, Davidson is extremely selective of what she agrees to appear in. So, for her to finally say yes means that she must love what is coming up. Stay tuned and we will report new information as it becomes available.