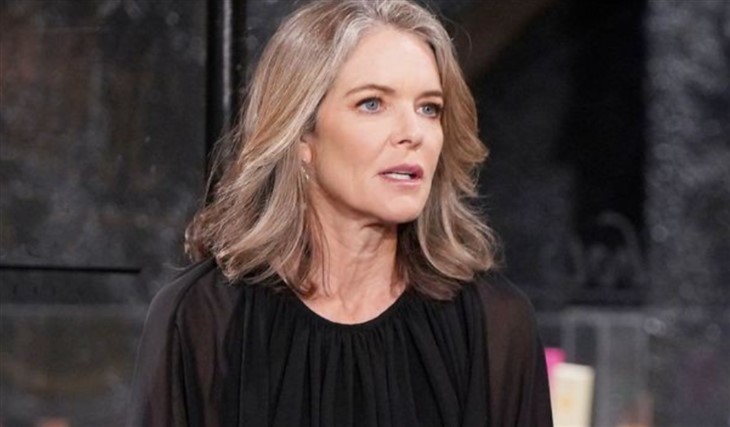 The Young and The Restless spoilers and updates tease that Diane Jenkins (Susan Walters) will feel ganged up on by Jack Abbott (Peter Bergman) and Phyllis Summers (Michelle Stafford). The two of them will ask Diane more questions about her past and she’ll be very uncomfortable.

The Young And The Restless Spoilers – A Voice From The Past

Diane has been receiving some inexplicable texts from who appears to be a voice from the past; the first assured her that Talia Morgan’s (Natalie Morales) articles were killed. Then she found out Nikki Newman (Melody Thomas Scott) had gone to LA to get dirt on her from Deacon Sharpe (Sean Kanan) who’d helped fake her death in Genoa City. Diane wasn’t sure if Deacon would have any dirt on her but she feared what he might say about her life in LA.

They hadn’t run into each other but once or twice during those years but she knew he’d seen her with a special friend in a Bentley. She suspects her special friend is the one who influenced Talia’s editor to kill the articles, but she doesn’t want anyone to know about him.

Diane becomes very uneasy when she realizes that Nikki’s returned from her trip out west and Jack and Phyllis both have questions. Diane had said when she first returned to Genoa City that she’d lived a modest lifestyle, and her friendship with the man who actually owned that Bentley could be misunderstood. Sure enough, that’s what they are asking about, Nikki has already bragged about Diane’s “lies”. Diane doesn’t divulge who her friend was, or what he was to her beyond just a friend but she calls him a past mentor who got her started in real estate. He was the one with all the money, not her, although she made enough modest sales to survive.

The Young And The Restless Spoilers – Why Gang Up?

The thing that bothers Diane the most is why Jack and Phyllis are questioning her together; she feels ganged up on. She also fears that Phyllis has gotten to Jack with her hatefulness and accusations of her. Jack is the one person that has believed in her besides their son Kyle Abbott (Michael Mealor) who has come to a modicum of trust in her.

Why has Jack invited Phyllis to this reveal of Diane’s past party, and will he even believe her story? Once again, she finds herself having to prove what she says and Phyllis as usual is having none of it.