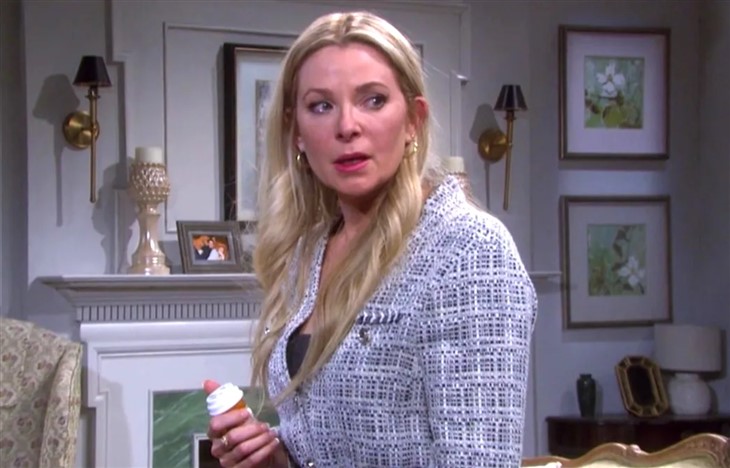 Days of Our Lives spoilers and updates tease that Jennifer Deveraux (Cady McClain) will be driven over the edge. She is likely the one who attacks Gwen Rizczech (Emily O’Brien) and puts her in the hospital after Gwen threatens to spill the opioid addiction tea.

Days Of Our Lives Spoilers – Busted

Gwen had come over to see Jack Deveraux (Matthew Ashford) at the Horton House and Jennifer was there. Jennifer thanked Gwen for putting Leo Stark (Greg Rikaart) in jail for killing Abigail DiMera (Marci Miller) and she, Jack and Gwen started talking about it. Gwen actually didn’t think Leo had the guts to kill someone, even though he’s the main person of interest now, noting he’d accused Craig Wesley (Kevin Spirtas) of framing him.

Jennifer wasn’t sure that Craig was a killer, knowing the man but agreeing he could be a snake at times. Jack and Gwen left to go to the Salem Spectator but she forgot her purse – and busted Jennifer with her pills.

Jennifer quickly tried to cover, telling Gwen the pills were antibiotics for a sinus infection, but Gwen wasn’t fooled, she recognized them as opioid painkillers. Gwen had seen these pills before when she was blackmailed into being a drug runner for Dr. Clay Snyder (Michael Lowry) and reminded Jennifer of that. Gwen’s mother had been an addict and she used to hide pills behind photo frames too, and Gwen wanted to help; she started to go get Jack. Jennifer warned her and told her she’d better not even think about it, and she meant business the way she sounded and looked at Gwen, like it was a threat. Gwen had reminded Jennifer also how she had researched the family, including Jennifer, and knew that she had been an addict in the past; she only wanted to help.

Not too long after Jennifer’s and Gwen’s argument, Gwen is found injured by Salem Police Commissioner Rafe Hernandez (Galen Gering). She is injured badly enough that she is rushed to the emergency room at Salem University Hospital. The DOOL fall preview shows that Jack does find Jennifer’s pills, and that might be because Gwen does tell Jack and he confronts Jennifer.

Jennifer is also shown crying and driving in the dark, where she intersects with two other cars on the road and there’s a deadly crash. Jennifer may injure Gwen severely by running her over, having been driven over the edge with the confrontation about her addiction.