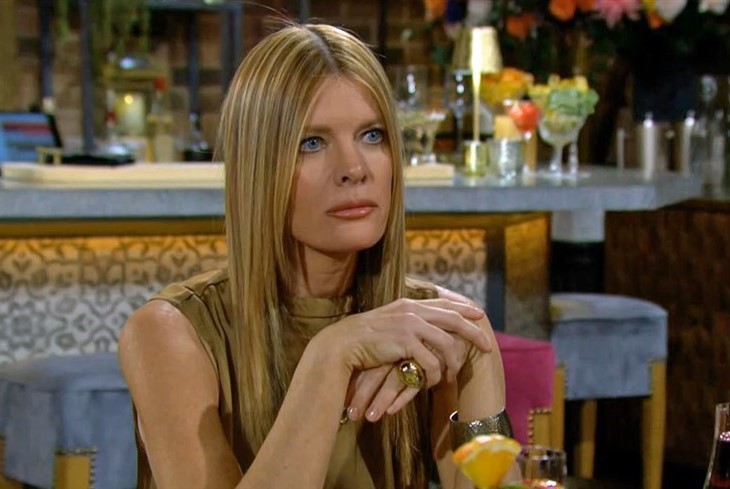 Diane Jenkins (Susan Walters) is convinced that Phyllis is trying to knife her. Her instinct is right. But Phyllis continues to refute the accusations as part of her conspiratorial plan with Nikki Newman (Melody Thomas Scott) and Ashley Abbott (Eileen Davidson).

Nikki flew to Los Angeles, California, to force a meeting with Deacon Sharpe (Sean Kanan). Deacon is lured by text to a hotel suite.

As devoted fans know, Nikki was married to Deacon approximately a decade ago in real-time. He was also romantically involved with Diane (as played by Maura West) at that time in the plot.

Deacon’s connection to Diane led to him helping her fake murder. He supposedly obtained a corpse. How the cadaver was identified as Diane requires a significant suspension of disbelief scenario to be accepted by the audience.

Nikki and Phyllis will be overjoyed if Deacon is able and willing to provide useful evidence of Diane’s guilt or complicity in a crime having occurred.

Phyllis is working on the home front while Nikki is operating in California, and Ashley is off-screen. Stafford’s character appears to be keeping Diane distracted with amateurish schemes, like placing a file on her computer.

One of Phyllis’ problems is that she knows all eyes are on her. Kyle Abbott (Michael Mealor) and Jack were discussing Diane’s report about the computer file possibly being a setup. Both men are tired of the bickering and are committed to letting one of both ladies go if necessary.

The Young And The Restless Spoilers – Diane Jenkins Does Nothing Current?

It appears as though Diane has been living a clean life since announcing her existence and returning to Genoa City, Wisconsin. If so, that may be enough to retain her son’s continued devotion.

Diane will be revealed as the poor soul if Jack or anyone else learns about Phyllis or Nikki’s efforts. However, if either lady succeeds in either exposing some criminal misdeed Diane committed, she will likely lose any credibility that has recently been gained and potentially, her freedom.