Y&R Spoilers: Diane-Phyllis Battle Is Worn Out – Time For New Direction In GC 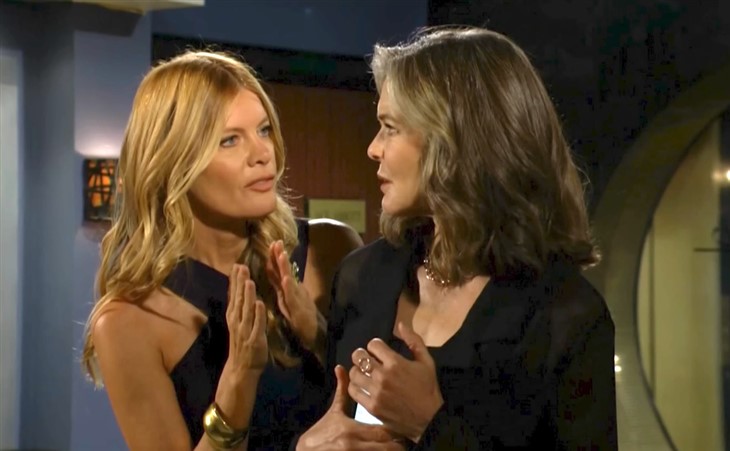 The Young and the Restless (Y&R) spoilers document that Diane Jenkins (Susan Walters) and Phyllis Summers’ (Michelle Stafford) battle is worn out. The viewers have seen enough instances of endless bickering. The ladies do not like or trust each other. Understood.

Hopefully, Diane’s selfless resignation, which followed Phyllis’ provocation, is a breakthrough. TPTB need to advance a storyline that has become repetitive and directionless.

However, it is possible that the pending arrival of One Life to Live veteran Trevor St. John, who is soon set to debut on Y&R, will help to explain why Diane and Phyllis were written into the corner where they are both standing.

The Young And The Restless Spoilers – Jack Abbott Defers Responsibility

Jack broke up Diane and Phyllis’ intense conversation that included Walters’ character raising her voice. His response underscored why this plot is stuck.

The head of Jabot said that if Kyle Abbott (Michael Mealor) or Summer Newman Abbott (Allison Lanier) had heard them talking, they would have been fired. No strong leader should allow top executives to hire their mothers, knowing that those ladies detest each other, and then enable a dysfunctional connection that creates constant dissension in the workplace.

So, Jack’s deferral of responsibility is unbelievable. Yet, his link to Diane and Phyllis makes it soapily digestible.

The comeback of Walters’ character has been intriguing. She long was one of GC’s villains. But in her current form, Diane is trying to be a better person.

Few want to give Diane a chance, outside of Kyle, Summer, and Jack. Diane anticipated that atmosphere but is enduring it because of her love for Kyle, support of his marriage, and love for Harrison Locke (Kellen Enriquez).

But Diane has not been able to keep her emotions in check when Phyllis appears. Stafford’s character also is unable to behave rationally and remains bitter because Jack ended their relationship due to the Diane issue.

The Young And The Restless Spoilers – Phyllis Summers Has An Out

Viewers know that Phyllis is not like Diane, who is operating alone. Nikki Newman’s (Melody Thomas Scott) trip to Los Angeles, California, is producing some new leads that might help to bring Diane down.

Deacon Sharpe (Sean Kanan) told Nikki he has an item that should interest Nikki. That, along with his tell about a man Diane was seen with during her time in LA, and her driving a Bentley, may prove useful.

Phyllis needs Nikki now that she is on the ropes at Marchetti, with a last second-chance anticipated for the rivals.

Y&R Spoilers: 3 Must-See Moments For The Week Of September 26